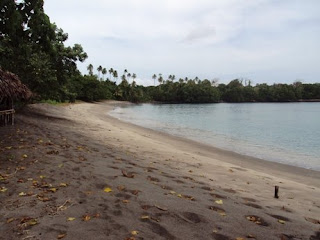 While I was at university in Los Angeles, I’d occasionally head to the beach as late as November and as early as February or March. Occasionally days would be sunny enough to warrant a trip to the beach, but no matter the sun, the water was far too cold. You could put your feet in or maybe wade up to your knees, but LA ocean water in the winter is as cold as San Francisco ocean water in the summer. Fortunately, the water is warmer in Samoa.

Peace Corps Samoa worries about its reputation as “Beach Corps”; the phrase is brought up at meetings as a way to bring caution and seriousness to our jobs. We all must actively work to dispel this reputation. And we do. Teachers are serious about improving our students’ educational environments, and village-based volunteers get a lot of grant money and do a lot of customized work for their village.
But what’s the point of having a “Beach Corps” reputation if you can’t get to a beach?

So when a family at church invited me to lunch and a trip to the beach this morning, I accepted. I am in no place to deny free food or a free trip to the beach. It also seemed like a solid way to better integrate into my community (Peace Corps buzz word bonus! Heyo!). Also, it wasn’t like a strange family approached me to ask about the beach; it was a family I usually sit near and I’ve slowly befriended over the past 6 months.

The Peace Corps is a constant lesson in readjustment and adaptation, and it’s funny (annoying?) how adapting to one situation requires that you later re-adapt to the original situation. It’s like how jet lag’s a bitch coming and going. I’m pretty well adjusted to living a semi-ascetic life, and spending the day with people who live in a tax bracket 3 or 4 jumps up from mine required me to step outside the box a bit. Luckily, the beach doesn’t discriminate by class. Also, it’s not difficult to adjust to L&P soda, real brewed coffee, and Cool Ranch Doritos. So the adjustment wasn’t all that difficult.

And one of the family members attended university in New Zealand and majored in psychology and we had an insightful and slightly witty conversation about Maslow. It was pretty awesome. It felt like a Woody Allen movie.

We went to Aganoa Beach on the south side of the island, which I’ve heard about from other volunteers, but I’ve never been myself. When we rolled up, there were admission prices for vans, trucks, and 4x4 vehicles. I thought it was weird that regular cars were not listed, but I soon understood when we had to drive through 2 feet of water for about 30 yards on the road down to the beach.

Most beaches in Samoa are reef beaches, which means you have to wear sandals to keep your feet from stepping on coral, and it’s nearly impossible to walk on the sand since it’s mostly jagged pieces of dead coral. Aganoa is a sweet sandy beach that actually has waves. It was pretty awesome. Also fun was that the entire family hung out in the water the entire time. We all just floated around and chatted. How pleasant.

The kids’ swimming skills were like none I’ve seen in Samoa. I challenged the 11-year-old to swim with me aways out, and she said, “Okay. Let’s do breaststroke.” Daaaang.

The day was really fun. I hope I get invited again.

Hope your weekend was great. Pictures below. 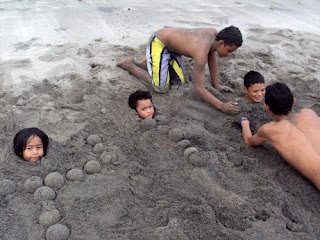 Kids burying each other in the sand. 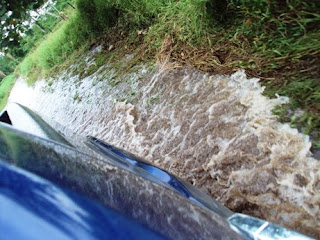 The truck wading through the water on the way out. 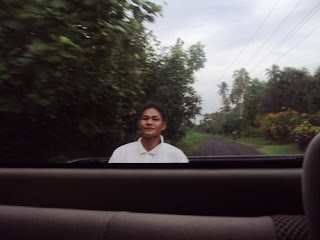 Picking up a hitchhiker who needed to go up the cross-island road. 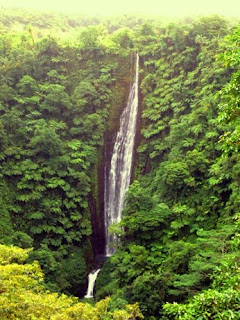 Papapapatai Falls off the cross-island road.

Labels: Out and About, Weekend