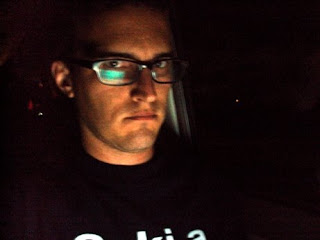 Paul, Phil, and Supy took a trip to Fiji during the first week of our break—the week my parents were here, the week before Early Service Training on the beach. Talking to them about their trip, they mentioned feeling a bit weary about returning to Samoa. They didn’t dread coming back, but they were, you know, weary. This seemed in contrast to Koa’s feelings when he went to Fiji in March. Koa actually missed Samoa.

I enjoy traveling and staying in hotels and stuff, but after a week of living out of a suitcase, I start to get antsy. The end of the trip becomes a relief. The thought of returning to all that is familiar feels like a light at the end of a tunnel. New Zealand was great, but I was a bit fatigued and the thought of returning to my own things and my own bed sounded great. Counting my bus fares from the past week, I couldn’t wait to get back to my car. I couldn’t wait to flop down on the couch and watch TV and not have to worry about figuring out my next meal.

The problem with this mindset is I’m not going home to my car. I don’t have a TV. And I do have to worry about what I’m going to eat for dinner tonight. And when I realized my feelings of relief about a light at the end of the tunnel that wasn’t actually there, it was sad. Returning to my familiar stomping grounds in Apia is great, but it doesn’t quite feel like returning home.

Samoa isn’t a home I’ve returned to before. In that sense, I’m still moving in. I’ve knocked off a lot of things on the checklist for emotionally staking out a home this past month: I’ve had visitors come and go, I’ve had my first real down time after my first term of school, I’ve left Samoa, and now I’ve returned. I’ve lived here for nearly 8 months, but I’m still moving in, I guess.

So I spent the morning weary. I returned the copy of Angels and Demons I finished last night. I took advantage of an hour of free internet at an Esquires Coffee Shop. I bought myself a souvenir t-shirt with a kiwi bird on it. I wore my brand new “Seki a Samoa” shirt and some ladies at a juice bar in the terminal giggled and waved at me when they saw it. And then I caught my flight back to Samoa.

The weariness of the morning was washed away a bit the moment I stepped off the plane. New Zealand was awfully cold and dry, and the warm humidity of Samoa’s late autumn cloaked my body immediately. It was like a sweaty hug from the island.

I’m typing this on the Aggie Grey’s shuttle. The sun has already set, and the road to Apia is pretty dark. Cars on the road are sparse, owing to the time of night and the fact that today was a national holiday. Fales glow with light on either side of the road. The sides of the road are luminously green in the headlights. Flying bugs are collecting around my laptop monitor. The ride is bumpy, but familiar. The whole thing is familiar.

I guess it’s not so bad to be back. 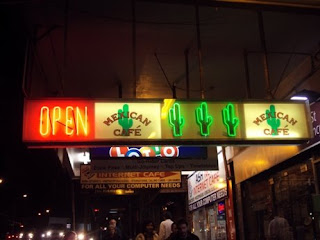 Mexican Cafe. This was where I ate night 2 of 3 on the Mexican Food of Auckland tour. 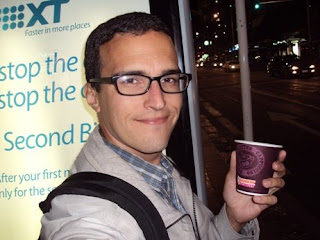 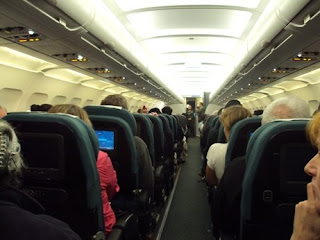 On the airplane, waiting for the Samoan medical staff to come on board to ask us if we had swine flu.

Labels: Apia, Off the Island

Of all your postings this one brought me a few tears. I'm glad you're safe. I love you. Dad.

Ahh, the little sheepies and Kiwi are gone from your mast head. They were cute that is for sure. Maybe you need a chicken or a pig?

I wish you guys would get out more in Apia socialising and introducing your selves around to make non work friends. You're a very interesting guy and your PCV buddies are not bad either, so tons of folks would welcome you in their lives. I dont mean your village family who are fond of you, but just regular guys and girls working in and around Apia. They'll look out for you and appreciate the work you do because they themselves have all had a PC teacher in their lives.

Maybe then the place wont be so bad to come back too. I hate to think my PCV econ teacher who changed my life was lonely while serving in Samoa.