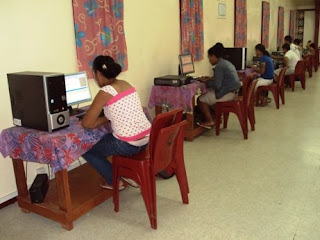 Last night was 16-bit Video Game Night at Cale and Sara’s, and since transportation is difficult, Erik, Ryan, and I slept at their house. With the upcoming CAT looming, I had made arrangements to teach my year 12 class at 9:00 a.m. today. So Erik and I woke up at 7 and shared a cab back into Apia. I walked home from Erik’s through the rain, threw a lesson plan together, and headed over to my classroom at 8:45 to turn on the computers before students showed up. Silly me. There I was expecting students to be on time on a rainy Saturday morning.

It wasn’t bad though. Saturday classes aren’t uncommon, and as I walked past other classrooms, there were 2 or 3 classes going on already. And as I approached my classroom, I saw a couple of year 13s, Site (pronounced See - tay) and Mira, standing around outside my door, looking bored. So we chatted for a while. They were there to type their history papers. I had no prior arrangement with them; they didn’t know I was coming. So I’m not sure how they would have gotten into the lab without me unlocking the door. But psychic events like this are extremely common in Samoa. I choose not to question it.

The idea of showing up on Saturday morning to teach classes was loathsome to me when I first heard about the practice during training. Growing up, the phrase “Saturday School” was a punishment one was given when he showed up tardy to regular school classes too often; how dreadful it was, those truants having to go and learn on a Saturday.

But I’ve come around to actually enjoy Saturday classes. I think my biggest change of heart came when I heard that students like Saturday classes because it gets them out of doing chores at home. They’re also far more casual than regular school. I wore a t-shirt and shorts (as opposed to my business casual collared shirt and ’ie faitaga), and students aren’t required to wear uniforms. So the atmosphere feels fresh and laid back.

And they didn’t all show up, which was pretty great. I didn’t send any notice home, so it’s not like parents knew to force their children to come. The ones who showed up are the ones who want to be there… or perhaps they’re the ones who just really wanted to get out of the house. Either way, with a smaller, more invested class, teaching is a lot easier.

I think the rain really made the day though. The virtue of Saturday classes is their coziness, and what better way to feel cozy than to be inside when it’s raining? I think it’s why we all remember Heads Up, Seven Up so fondly: being inside on a rainy day just feels good.

We did a practice CAT together, and then I set them free to work on another one independently. They stayed for about an hour and a half before they packed up and headed back out into the rain. It was the kind of deal where I almost felt like taking them out for McDonald’s or something; maybe if we all had cars to pile into that would have worked (and McDonald’s prices weren’t outrageous). Maybe if we were in The States.

But there Saturday school would be a punishment, and therefore undeserving of McDonald’s. Oh well. 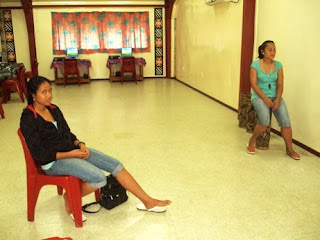 Site and Mira hanging out. 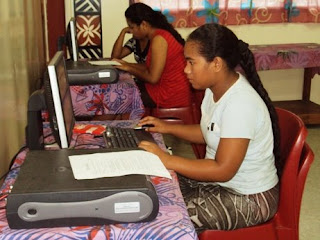 Motu in the foreground, Elisapeta in the background with her friend. I think 3 of my students brought friends who came and watched them do Excel for an hour and a half. I had no problem with it. 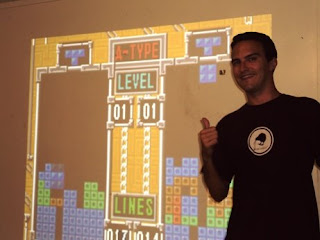 Tetris at Cale and Sara's. Sara beat me in a head-to-head match. 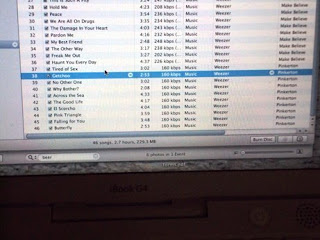 Weezer on the playlist at 16-bit Video Game Night. 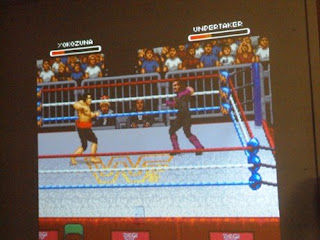 WWF Wrestling (before it became WWE) projected on the wall.

Nice computer lab .. flat screen and all. Way more than what I had when I was in school ... which was pretty much dismal! Great to see the schools are somehow equipped