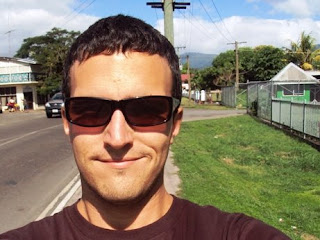 Relative to the population of the world, Samoan is spoken by only a select few. It doesn’t really span nations the way Arabic or French or Spanish does. There is no Samoan interpreter at the United Nations, and the language itself is so nuanced and changeable that the Samoan-English dictionaries we were issued upon arrival are obsolete in many instances. Yet with all this, there is much value in learning as much Samoan as I can. My students speak it natively, it is spoken at my staff meetings a great majority of the time, and the more familiar with it I am, the more I can function in this country. Additionally, there are large pockets of Samoans in the San Francisco Bay Area, and fluency might be useful in getting a job somewhere down the line.

The problem is I live in Apia. Most of my interactions are in English, not necessarily because I am lazy and I don’t want to practice my Samoan, but also because people who live here want to practice their English. It goes both ways… and thus, at least once a day when I’m walking down the street, I will see a native Apian who will say. “Hello” in accented-yet-passable English, and I will respond with “Malo” in struggling-but-trying-nonetheless Samoan. It’s a funny, non-intuitive interaction, but I swear it happens all the time.

I usually default back into English because a.) I already feel like a fraud and b.) it’s likely the other person’s English is much better than my Samoan, so it hardly seems worth it to drag things out.

And once the interaction takes its course in English, there’s always that question about whether it’s my business to correct grammar. For the most part, I figure brief conversations at the grocery store or with the waitress at the pizza place are not appropriate teaching moments. Yes, these people want to develop their English skills and it might help if they were corrected in situ, but I think it would be obnoxious for me to correct a person’s sentence. Maybe it’s different than when someone would correct your spelling or grammar in an AIM Instant Message window, but I feel like it has the same nitpicky feel. And truth be told, I don’t think I want my Samoan to be corrected immediately.

But maybe that’s because I’m more worried about understanding Samoan than I am about speaking it. It’s most satisfying when an interaction happens in Samoan and I’m able to keep up. One of the 11.1 students approached me yesterday asking for his corrected exam paper. I was busy at the time, so I told him I’d bring it to his classroom soon. And then I added, for good measure, the Samoan word for “soon,” toe’ititi.

He looked back at me with a pained expression and started in English, “But…” he trailed off because time was of the essence and figuring out the convoluted English phrasing would take too long. “Toe’ititi tu’ua le a’oga.” That is, “School’s almost over,” he blurted.

This was actually news to me—no one told me school was ending early yesterday—as usual—but I am very familiar with that phrase, and I caught his drift, and everything worked out.

But I guess everything’s a work in progress anyway.

I hope you have big plans for the weekend. Pictures below. 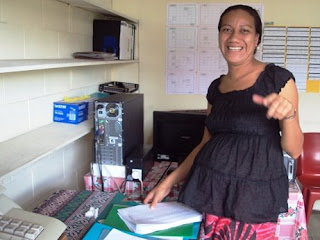 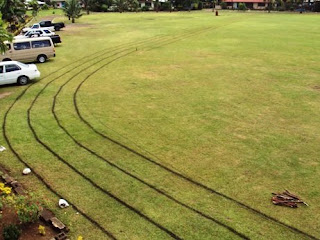 They've been slowly spray painting a track on our field. 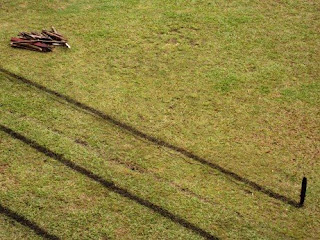 They do this by using sticks and string. I wish I were more involved. I'm curious how scientific they are with it. 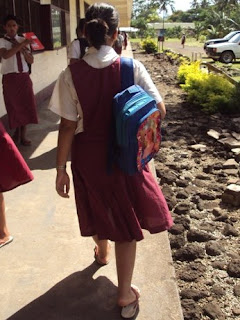 One of my year 12 students, Vaiolo, wearing a Barbie backpack. Not typical.

I like your sunglasses! I'm so happy to see you wearing them.

As a kid I always wanted to show off my 'pagu pagu' English that I never considered the incredible effort made by a volunteer palagi in Samoa for a limited time, when I responded back in English evertime. They usually gave up and communicate in English because it seemed easier. I feel bad now and would have preferred to have been more helpful with practising their Samoan. After all I have the rest of my life to practise English with strangers on the bus, train , school, boats, 1900 numbers, church, movies..etc.

Here's how you can correct your Samoan and learn at the same time, www.bickersc.com
Samoan TV news item available at http://youtu.be/U2sgCe2DFjk
regards