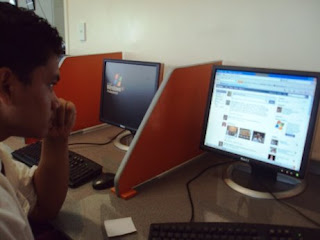 I agreed to the whole thing on principle. First, I sometimes feel like my presence here is a little frivolous, and I look for opportunities to leave some sort of lasting impression. Second, though Filifili is not in my year 13 computer class, he hangs out in my classroom all the time, so I felt like he’d earned an email address. Third, I plan on taking my year 13 class down to the Internet café at some point this year to get them email addresses, and I figured the process could use a dry run before I dive in on that one. Fourth, I like to think that some of the connections I forge here will last longer than my time in Samoa, and its in my interest to get my kids online so they can email me later.

So today after school, he and I headed into town. I was still skeptical he actually had anyone to email, and I figured we’d discuss that on the walk over, but we chatted about school and gossiped about teachers, and soon enough we were at CSL.

Pretty much as soon as he’d asked me about an email address, I decided on Gmail. I figure it’s the most user-friendly, right? I still use my Hotmail account, but the interface is so cluttered with all the ads and such. So I didn’t really give Filifili a choice in the matter. Gmail it is, kiddo.

One thing that I learned will be important in prepping my computer class for their turn at the Internet is making them thing long and hard before they go in about what they want their email address to be and especially what they want their password to be. Fili got away with firstname.lastname, but choosing a password seemed to take forever. To Fili’s credit, choosing a password is sort of a vague concept when you think about it. “Choose an 8-letter word that you will be easy for you to remember that no one else will remember.” In the end, he accepted one of my suggestions.

So once that was over, we went through a crash course on how to write an email. I think by then he was starting to feel overwhelmed. He was cool with the concept of entering in someone else’s email address, and he could write out the body of the email okay, but he seemed a bit baffled by the “Subject” box. We’ll work on it. His first email was to me. It reads, “You are to invited to birthday party tonight , please come .” Thanks, Fili.

Then he emailed some guy he knows who lives in Korea. He knew the email address off the top of his head, and he didn’t get any immediate notice about it not being deliverable. So I guess he actually had good reason to get an email address. Cool.

Once we finished with email, I took him for a spin around the Internet. We went to:Yeah, toward the end there, my id realized there was fast Internet available, and I got a little selfish. But I feel like it was authentic and more pertinent to him than the New York Times’ web site anyway. I think I might leave the Facebook part out when I bring my class.

And then our time ran out. We were heading in opposite directions, but he seemed genuinely thankful. It's not every day you get to meet the Internet for the first time. 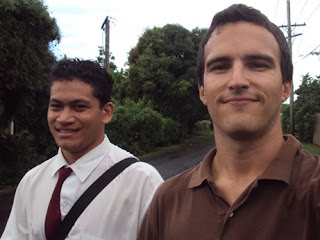 Walking to the Internet. 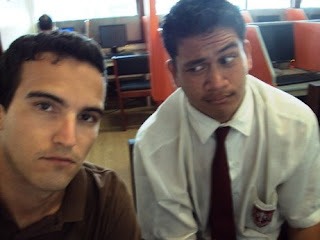 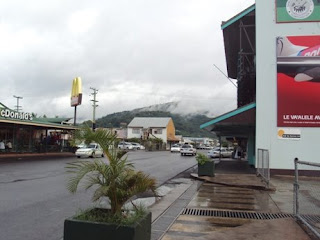 The expressions on Filifili's face are pretty priceless, the kid looks like he's got some savvy. Cool of you to invest a bit in him, it is worth it.

How in the world did you set him up a gmail account? When I tried to set up a gmail for a kid at my school it required sending text message to a cell phone for verification and it said that it didnt send texts to Samoa. It said I could invite her to join gmail, except 1. I do not have the invite button in my gmail account...apparently , I am not special. and 2. she would already have to have an email that i could send the invite to. Stupid.

So then I set her up with a yahoo account, except the yahoo interface was so slow that we gave up and used my email address to send her email.