The Self-Imposed Mental Endurance of the Peace Corps 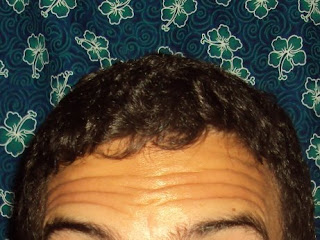 Sure, it’s difficult being a Peace Corps Volunteer. Posts tend to be isolated and the lifestyle can be destitute. There’s the occasional sweeping of the 20 millipedes or the difficult flushing of the slug crawling through the kitchen sink. There’s the disease, the challenge of the primary project, the cross-cultural difficulties. Blah, blah, blah. It seems to me the most difficult challenges volunteers face are the self-imposed kind.

I’m not sure that we all do it. I’m only really familiar with group 81 and a little bit more of Samoa. I can only infer about the rest of the world. The Peace Corps recruits across demographics, and people come from vastly different backgrounds. That said, it seems like all of us have this bizarre masochistic urge to impose difficulties and restrictions on ourselves if for no other reason than to prove to ourselves we can deal with them.

When Rosie 79 moved to her site on Savaii back in December of 2007, she stayed out there for her first 6 months. Phil refuses to buy groceries for himself until he is completely out of food; I think he occasionally subsists on canned tuna for days on end when he is trying to get rid of the food in his house. There’s all kinds of volunteer lore about past volunteers who did forged slightly bizarre lifestyles “just to see if they could do it.”

There was another guy who decided to try and co-habitate with the bugs. K8's a vegan, but I guess she had been for a while before she came here.

For me, the self-imposed restrictions are mostly slightly more extreme variations of the normal difficulties bachelors and lazy people impose on themselves. But I feel like since I have a goal in mind, there’s a dividing line between me and the lazies. It’s been about 6 weeks since I’ve done laundry, but I really feel like if I keep my head down and focus, I can hold out until the end of the month next week. I desperately need a haircut, but if I put up with it for another week, my hair will be a good length for my distance relay race in August.

And none of these things are physically difficult. It's all just mental endurance. It's all just testing the outer limits of the Peace Corps asceticism. Trying to find your own niche in a long tradition of meaningless tests. And why not? It's not like we don't have the time.

I hope you’re pushing your limits. Pictures below. 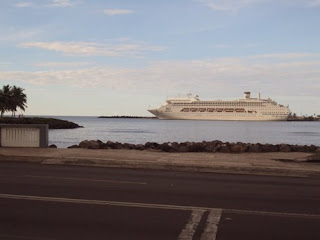 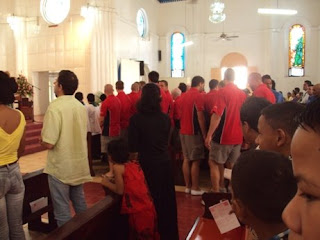 Some English rugby team was at mass yesterday. This is them trying to cram into the pews after church started. 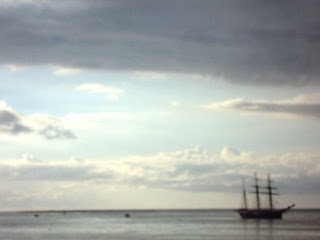 This clipper (pirate?) ship has been in Apia Harbour all week. 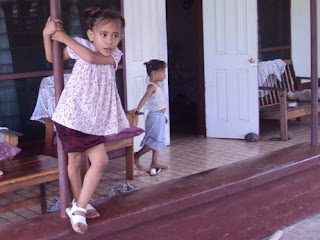 My pule's twins, Faith and Grace. They are darling.

I love the curls!

hey i've been checking in on your blog since last december when i stumbled upon it as i was planning a trip home and wanted to see what was good in upolu and savaii. your posts are awesome to read - i share a lot of your sentiments about samoa, despite being from samoa (left at 18 to go to university in land of tech...Seattle). for the most part it seems your humor and good attitude may keep you afloat better than most. good luck on the rest of your journey and thanks for making your posts public!

I reckon use the opportunity to grow your hair long. Ask one of the overachiever students to do your washing in exchange for advance Excell tutorials. Plus extra Maths tutorials if they bring you meals as well. win win for everyone..

I reckon if they do a poll, your blog is the 3rd most visited news/article type website about Samoa behind the Samoa Observer and Samoalive News. The funny is I reckon most would prefer to read your reality life show in Samoa updates rather than the gloom sold by the news sites. Anyways keep up the good and look after yourself out there. Regards to Blakey, Koa, Supy and all those other guys whom I sorta kinda know through your blog.