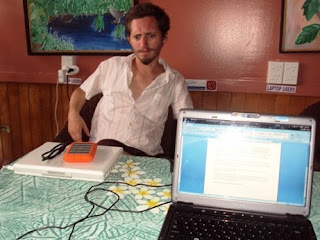 I haven’t heard the rumor about the huge internet cable that’s being laid between American Samoa and Western Samoa that is supposedly going to revolutionize the speeds of our internet connections here. This rumor was popular in January when the cable was supposedly going to be connected in March. By March, the rumor had adjusted to May, and by May, June. But talk of this savior cable has quieted, and occasionally on days like today, it seems like the Internet in Samoa has regressed.

The fastest and most affordable connection in Apia seems to be the popular and seemingly ubiquitous LavaSpot. The service allows a user to connect wirelessly with his/her own laptop, and if you buy in bulk, you can pay as little as $7 WST per hour, which is a better rate than you’ll get from any of the Internet cafés.

LavaSpot is run by Computer Services Limited (CSL), which runs one of the more well known Internet cafés in town. CSL and LavaSpot both suffer from a lack of reliability. At times it goes through the normal waves of fast and slow the same as Internet service providers in The States. But CSL is also known to close for a week at a time with no prior warning. I showed up there today with poor, eager Filifili only to see signs in the window saying that they’re closed until Friday with no explanation as to why.

The other reliability problem with LavaSpot is the connection speed varies greatly depending on your connecting point in town. In my experience, CSL’s Internet Café is also the fastest LavaSpot location, which makes sense. Though other locations are much more convenient (Aggie Grey’s, Pasefika Inn, arguably Cappuccino Vineyard), connection speeds can be astoundingly slow. Though such speeds are still faster than dial-up by a factor of 3 or more, it’s not much of a consolation. It may take me 3+ hours to download a 20 MB podcast from my house, but the same download will take 1+ hours at Aggie Grey’s. That’s a long time to sit around bored.

It would be interesting to see some research on the addictive nature of the Internet. It’s weird how for all of the whining I’ve done so far, I actually don’t care too much about using the Internet very quickly. Podcasts are kinda perfect because they’re current and they make it feel like I’m actually listening to the radio while I wash the dishes or sweep or whatever.

Dylan used to claim that he had to keep lists of things to do so he wouldn’t just stare at the screen blankly. I guess I can relate to that a little.

Nonetheless, I try and make it to the main CSL once a week, and nothing breaks the heart more than rounding the corner, approaching their eternally confusing push/pull French doors, only to be locked out. Also, the sign in the window reads, “We apologize for any conveniences [sic].” As Cale put it, “Don’t worry about it. No convenience here.”

I hope this page loaded quickly for you. Pictures below. 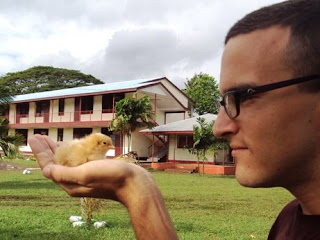 There was a chick in the middle of the road on my way out of the house Saturday morning. It was too small to fear me. I picked it up. 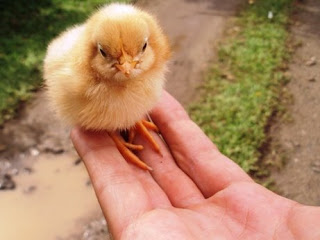 My pule showed up just as I was leaving, and he took it. 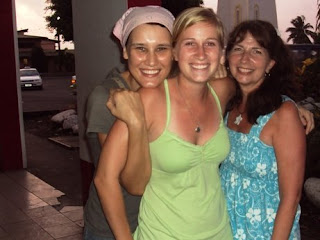 You finally have a pet to keep you company.

Such a look of consternation on Cale's face!

Oh my gosh...you do look like you're at home or at Avo's or whatever...it just looks like your dad should be there!

Hi Matt. I have recently started reading your blog and for some reason I decided to read from the start. Now I'm up to this post. I was going to save any comment for when I had finished reading your blog in it's entirety to date, however this post made me laugh as when I was in Samoa last year, I did the exact same thing as you in the exact same week - rocked up to CSL only to find it closed! I was livid to say the least considering I bought hours in bulk and I had zero tala to spend on internet time elsewhere in that very week! Thanks for these pearls you post. I only wish I had come across your blog sooner.