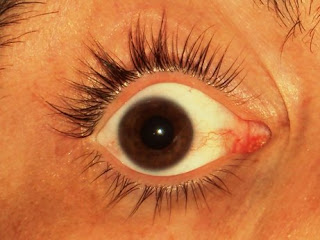 Against Teuila’s advice, I have worn contacts the last two days. I started wearing them back in March, and I scratched my cornea, and Teuila the Peace Corps Medical Officer warned me that if scarred my eyes too much, it would render me ineligible for Lasix surgery. I’ve never taken the idea of surgery very seriously, although I figure maybe I will someday. Technically she told me “not for a long time,” and the doctor I saw at the time encouraged me to wait a month. It’s been three, so I figured I’d try it out.

It’s interesting how Samoans have reacted to my glasses. One day during training, Asolima asked me out of the blue, “Why do you wear glasses all the time?” Ummm… So I can see? It seemed like an obvious answer, except for the fact that it’s fairly rare to see Samoans wearing glasses. Occasionally elderly people will wear reading glasses, but other than that, it’s rare to see anyone in glasses.

I think my thick black frames have a certain amount of charm. And in addition to the whole Weezer factor, I think they also fulfill a certain expectation I had coming into the Peace Corps as far as eyewear goes. And sometimes it feels good to fulfill expectations.

On my first day in the village, a bunch of the local boys started referring to me as “Spider-Man.” They would yell it down the street or at the top of their lungs from far away while I was walking down the road, “Malo, Spida-man!” I would do the whole web-slinging action, and they’d burst into laughter. What can I say, I give the people what they want.

Anyway, I’ve wanted to go back to contacts for a while. They’re lower profile. They call attention. And sometimes that’s nice and friendly, but sometimes I’d rather just be part of the wallpaper… errr… traditional decorative wall-hanging.

It’s frustrating how fussy my eyes are though; even in the humidity. In New Zealand, my body wasn’t used to the dryness at all, and I’d get incredibly ashy. So as much as the heat in Samoa requires drinking lots and lots of water, the humidity acts as a natural moisturizer when it comes to skin. But with the eyes, not so much I guess.

Other volunteers wear contacts all the time. Erik shows up to events in glasses occasionally, and it’s disconcerting. But like I said, very few people wear glasses here, and it’s weird when they do.

It was quite suspect when a girl in my 11.4 class, Olisa, showed up in glasses near the end of last term. She sits at the black of the class, and it seemed somewhat logical that she’d be wearing glasses in class. The frames were thick and black, much like mine, so toward the end of the period, I asked if I could see them. As it turned out, they were clearly reading glasses meant for helping far-sided people see up close. I asked if they were really hers and she claimed they helped her see the board.

Whatever. I’m a trend setter.

But anyway, as far as contacts go, the first week back is always a bit trying, so I’ll take things one day at a time. Blakey and I met today to discuss automating our schools grading procedures. Then we traded some movies. The typical Peace Corps exchange. 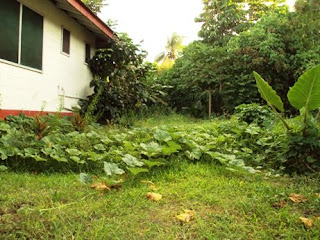 The side of my house is all overgrown. 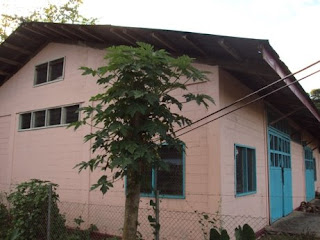 Except for this tree that is noticeably smaller than it was when I moved in. I think the coconut lady pruned the hell out of it. 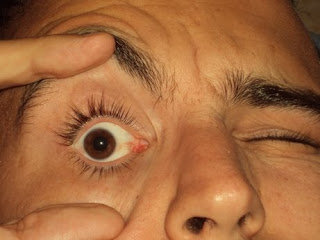 This is the full photo taken from the top of the post. In the end I decided to crop it for effect, but I like the original framing too.

I can't wear my contacts because my left eye weeps green goo. Thick green goo. Only when I am in Samoa. When I went to New Zealand, no problem.

When I was in training, Tasi would stand behind me as close as possible and stick her face next to mine so she could try to see out my glasses too.