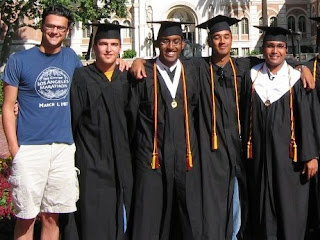 I declared my political science major very late in my college career after many other people had completed their major requirements, so it was crazy lining up for graduation and running into all of the people I knew and hadn’t realized were also poli sci majors. Jessica went on to do Teach For America and then went to UC Berkeley for law school. Damaris went straight to Harvard law. Evan works for the Democratic Party doing community organizing for Latino populations in Los Angeles. Katie was a year behind me, but also majored in Poli Sci, and she also went to Bolt at Berkeley.

Law school seems like a well-travelled path, and that makes sense; a law degree is super versatile. But I don’t know if it’s right for me. I hated Business Law when I took that in college, although that may have been the Business’s fault more than Law’s. The idea of being an attorney strikes me as loathsome, but I suppose there are lots of law-related positions that aren’t terrible. But is “not terrible” really what I’m striving toward?

I watched “Frost/Nixon” last night, and I liked Sam Rockwell’s character, a politically oriented academic. There was a brief phase during or just after college when I fantasized about getting my PhD, landing a professorship in Hawai’i, and coasting from there. This still works for me, except the number of people with PhD’s who go on to be professors is enormously small, and the thing that really makes me hesitant to get more into academia is the constant need to publish. Who wants that?

I’ve always loved movies, and I would love to make movies. It would probably top my list of things I’d like to do. But I lived in LA for 5 years, and I know how dreadful an industry Hollywood is. Hell, USC has the best film school in the country. I took one class and wanted to smack everybody in the face. It seems like getting a good gig in Hollywood depends a lot on luck, and the odds I spend 20 years waiting tables at Jerry’s Famous Deli are high. And do I really want to risk 20 years of my life to do something I’d find meaningful?

I’ve been counting on the Peace Corps to help me figure out what’s next, and the part of my job here that makes me most passionate (at this point, at least) is figuring out how to automate the school’s grading system. I’m getting ready to study macros because I think that’s what’s necessary for this project. It’s rare that I am excited about studying anything, but I’m pretty confident that I can get this thing to work. Perhaps I would like to get more into database management, learn SQL, be a database guru in Silicon Valley. But would that life really be fulfilling?

I hope you're being decisive. Pictures below. 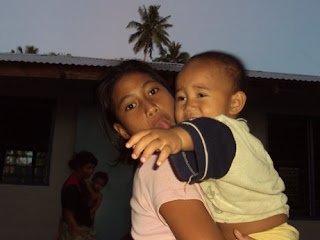 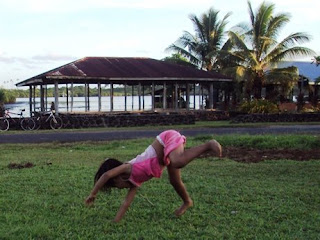 This game evolved out of nowhere. I would throw a stick, and Akanese would do cartwheels to the stick and then bring it back to me via more cartwheels. I call it "Cartwheel Fetch". 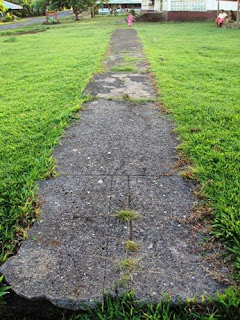 Until last week, I thought this was a bunch of graves lined up end to end, but Phil informed me it's a Cricket pitch. This makes much more sense. Olsen from the river fales was there during the conversation and when he heard I thought it was graves he said, "Yeah. We used to be really really tall!" Funny. 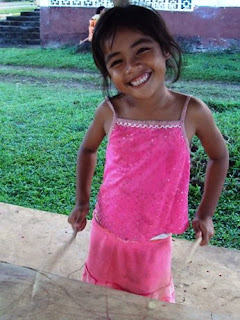 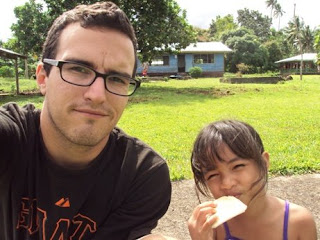 I like how skeptical each of our faces are here. Certainly not planned.
Posted by Matthew at 8:00 PM

Let's go to Hawaii together.

I always enjoy your entries that include Akanese. She is about as cute as can be and I love how she is so animated in each photo. It appears she is your little sidekick and it looks like she really adores you. What fun for both of you.

Chris said...
This comment has been removed by the author.
11:32 AM

I think there's a place in the online world for you somewhere.

If not sales then business operations.

If writing a blog paid a living, you could be a millionaire in that arena. Get advertisers, get on Oprah, you'd be set.
Maybe publishing and being a prof wouldn't be that outlandish for you....you get yourself to write a blog everyday, and though publishing is another story, you do have the self discipline. I could see you with elbow patches on your tweed jacket, a little gray at the temples some day.

I was reading an old post of yours about your genetic link to Annie because of some shared obsession with phone games. I have to acknowledge the genetic link to Uncle Paul that comes through in this one. Academia mixed with politics mixed with film. Oh...and the driving, too.