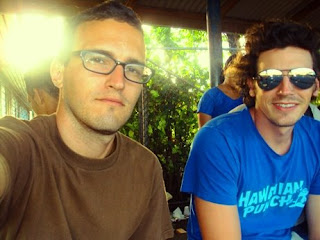 “Nothing to be done,” said Paul as he took off his Jandal. Since Peace Corps are often too cheap to take taxis around Apia, we often walk, and our feet are often dirty. Paul had washed his feet at the Peace Corps office and had dusted them off several times before that. But after walking across town to the bus stop at the Fugalei market, his feet were dirty again. He dusted them off again, but the motion felt useless.

Paul was in Apia for the last couple days because his school has a week off for the annual Methodist conference in Faleula. I was already planning on heading to Fausaga for the night, and it turned out he was going back to the village as well. The last bus to Fausaga, the Gālo Express, usually leaves the market late in the afternoon.

“You sure it was here?” Paul asked.

I usually catch the bus at the fish market, but Paul needed to break a large bill, and the Fugalei bus stop was more convenient. The bus stop at Fugalei is a bleak and crowded place; an awkward place to read a book and too seedy for flashing an iPod. There is little to do besides sit and wait and chat. Paul bought some chips from a man who was hawking them from a laundry basket.

A girl from my school came and sat with us for a while. She was heading back to her village for the weekend, and had bought a bunch of vegetables from the market to take home. She had a random sole carrying it for her. I didn’t recognize him, and while she sat next to me, he sat on the other side of Paul. Though they didn’t speak to each other the entire time she sat with us, it was clear her invisible leash on him was short.

Paul and I caught each other up on the latest Peace Corps gossip, talked about how teaching is getting easier for both of us, compared notes on the upcoming road switch. We talked about our respective pet projects and our anticipation of group 82 and the plethora of ripe, cheap tomatoes at the open market in Salelologa.

A young boy walked up and asked us for money. I had to go to the bathroom. Fearing the bus would come while I was away, I sprinted to the public toilets only to find them locked. I sprinted back.

When I returned, Paul had taken off his Jandals and was dusting his feet again. “Nothing to be done,” he said.

Music blared from other buses that weren’t ours. There is little variation in the music most buses play. It seems like they’re all just playing the same unending Akon song.

The zipper on one of the smaller pockets on my backpack has been stuck for the past couple weeks. Sitting at the bus stop, I had time to pick at it. A thread had become stuck in the zipper teeth. With some finagling I was able to pry it loose. I finally got it unstuck and I finally got the pocket open. It was empty.

We waited for 2 hours. “Nothing to be done,” said Paul.

The boy came back to ask for money again. We asked him when the bus for Safata was coming. “It won’t come this evening. But it’ll come tomorrow.”

Paul and I looked at each other as though we’d kinda known all along.

We sat there at the bus stop. 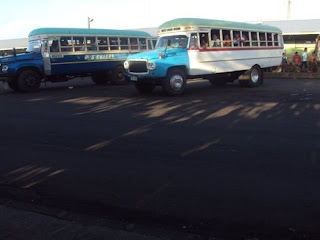 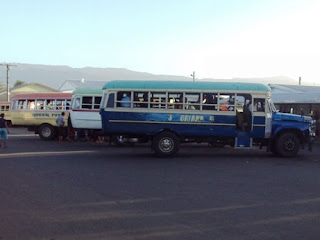 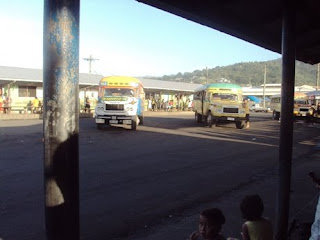 Though inconvenient, I wonder if it would not be more of a good thing to have to wait for buses. Here, many of us have our own car, we go and come in isolation whenever we want. If we had to rely on buses, we actually would have to sit and wait, and have time to converse with another human being, and not feel guilty about it because we are not being PRODUCTIVE!

Lmao! Reminds me of my Mother, brother & I a few years back when we were there to catch a bus to Lotofaga to see my Grandmother.