I didn’t teach this morning, but a bunch of the year 13 history students cajoled me into opening the computer lab so they could work on their Interval Assessments. I have been in massive sleep debt, so I was hesitant to give up a Saturday morning, but they looked at me with puppy dog eyes, and I couldn’t say no. So this morning I trudged over to the lab at 9:00 to open the door. I was under the impression I was going to let them in and they’d work and I’d sit around bored for a couple hours. I even brought a book. But it turned out they wanted me to edit their papers.

I found it strange when they told me they were all writing papers on the same topic, the 1830 arrival of the London Missionary Society in Samoa, but I shrugged it off. All 3 of the kids I worked with today are native Samoan speakers, but the assignment required a 1500-word essay in English. The entire assignment was in English, in fact. So many of the changes were pretty elementary; non-agreeing tenses, missing plurals, strange words that don’t exist in the English Language. At one point I was confused by use of the word “task, ” and it turned out they were using it as a contraction for the words “to ask”.

So I was moving through Mira’s paper pretty fast when I came to this sentence:

I had also understand the way that Samoa still late have an independent state that is, because theirs no Christians beliefs, but when Malietoa Vainu’upo accepted it in Samoa was go through the right way of life, and try to accept the nationalistic of others.

At first, I had no idea what she was trying to communicate, and after talking to her a little bit and reading it over a lot, I think she was trying to say that Samoa’s policy of the separation of church and state allows for a free-thinking country that accepts cultural and religious differences that exist within its peoples. So I tried to re-write the sentence, but I kept getting stuck on the “try to accept the nationalistic of others” phrase.

Mira calls over Site who typed Mira’s handwritten essay. Site reads my sentence over and looks at me like I’m an idiot. I half expected this. I wasn’t sure if there was an articulated separation of church and state in Samoa; I figured there might be—much evidence suggests the opposite—but what can I say? I grew up in society that still grapples with the difficulties of separation of church and state and the oppressiveness of any breach therein.

Site explains what the original sentence meant. Essentially, it said, “Thank goodness Malietoa let the missionaries in because up until then Samoa was a heathen place. Also, it was only when Samoa adopted Christianity that it became mature enough for it to be an independent state.”

My brain went to work improving the English and making the grammar work while my soul had a little cry. I didn’t come here to impart my beliefs or my progressive upbringing on moldable Samoan youth, and re-formatting essays this morning was by no means a teaching moment for a lesson on cultural heritage and pride and the questionable morality of 19th-century religious imperialism. So I shut up and helped Mira put her report together.

But I can’t help feeling weird about the whole thing.

I hope you’re enjoying your 4th of July, America. Pictures below. 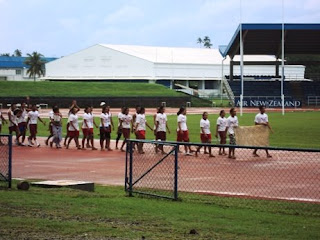 Phil's school made an impromptu banner out of a fala. 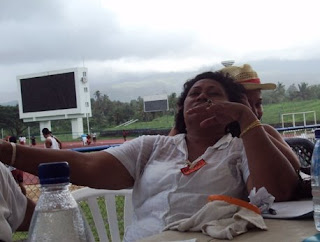 Head massage at the record-keeping table. 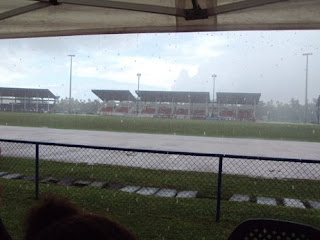 Rain at lunch time. It's difficult to tell from this picture, but the track is completely flooded. 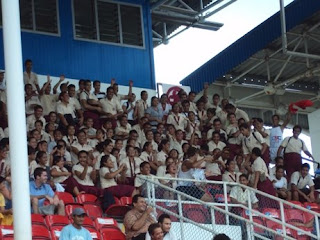 The guy dancing near the bars in the center bottom right was making the Congregational Senior College kids go crazy. Phil is also in this picture wearing blue in the bottom left.

Matt, your students are only retelling what they are being preached at. That is a common and sad belief held by many.
I hear stories of the earlier faifeaus who were grateful for any accomodation given. Not like the current yearly gift giving that is now the norm. The current Head of States wrote an amazing paper about Faa'alavelave in Samoa and how later influences have become the norm and how this needs to be addressed.
All we can do is keep at our young about being proud of who they are and of being proud of their earlier history. Including an earlier faith belief before the tiome of the missionaries.
Malo le galue.
I am happy to hear your heart talk about our people.
Soifua
Sonya

Totally agree with you Matt. This missionary ideology is completely endemic in Samoan culture that Samoan orators refer to the time before Christianity as "pouliuli" (dark night).

However, Samoa is a land of contradictions. Samoans all profess their faith in Christianity but they are also quiet believers in spirits and ghosts and other supernatural phenomena.