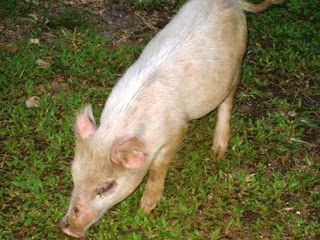 During interval today, my pule let the staff know that next week’s Science Fair is canceled on account of Swine Flu. Also, all government schools will be closed next week because of Swine Flu. Also we would know by the end of the day today whether Congregationalist schools would follow suit (although I never got a straight answer to this. Will we have school next week, or won't we?). This disease that seemed so far exotic and geographically far off is now in our front yard. And I’m still having trouble taking it seriously.

I don’t recall the first time I heard about Swine Flu. It was probably a phone conversation with Luisa. I do remember that NPR got all up in arms about it around Easter, was proclaiming it a non-issue by May, and back up in arms by June. I was checked getting off the plane coming back from New Zealand, but the medical personnel only asked that I check a box saying whether or not I was healthy. Other than that, the whole thing has sounded like a joke.

Except from the news, I’ve only heard of one case of Swine Flu: a girl in Luisa’s cousin’s class in California. First, that’s 3 degrees of separation, which means it’s only slightly more threatening to me than Kevin Bacon coming down with a cold. Second, when Luisa told me this, she accompanied it with a laugh—to which I responded with a laugh.

Pestilence is a funny word evocative of extreme biblical punishment. SARS was a joke. I remember during the SARS scare Roxanna would call out “SARS!” and point with an air of “J’accuse!” whenever someone would cough. It was entertaining. Also entertaining was Peter Saarsgard advertising his SARS masks on Saturday Night Live: the Peter Saarsgard SARS Guard. Hilarious.

The Peace Corps has kept a straight face throughout. We’ve received regular emails from the Medical Officer keeping us abreast of the state of Swine Flu in Samoa. Evidently hospitals have seen a significant increase in the amount of flu cases. Peace Corps Washington has made annual flu shots mandatory, although Samoa will not get a new batch until August. In the mean time, we’re supposed to wash our hands frequently and stay away from crowded places.

Since I have no TV, most of my news comes from rumour. Apong was first to mention to me that a school a little up the mountain from us, Vaimauga, was closing down because supposedly all of the students who stayed in the hostel tested positive for Swine Flu. Given this, and the fact that our school is so close to theirs, and given a high school student’s personal hygiene can be questionable at times, Apong concluded quite matter-of-factly that he was absolutely sure Swine Flu was at our school already. We must have had this conversation three weeks ago.

And I guess that’s the irony of me taking potshots at the disease from so far away. I feel so secure and isolated, and yet my computer lab, where over the past two weeks 600+ students have sat around using the keyboards and mice—the same keyboards and mice that I touch 4 or 5 times a day. I feel like I’m mocking the other pools of germs while I swim around in my own swamp of bacteria.. the moral being “people who live in glass Petri dishes shouldn’t throw stones.”

Whatever. The Petri dish might just be closed next week.

I hope you’re coughing into your elbow. Pictures below. 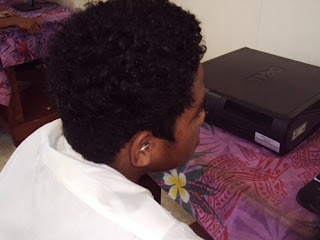 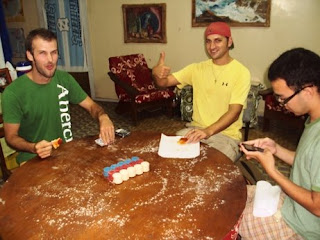 You can even make swine flu funny. But definitely stay healthy. And disinfect those keyboards once in awhile!

SARS was no joke. A lot of folks in Asia died from it. We were pretty-well protected from it in america because we don't eat civets, nor raise them for food or pets. (Check out the coffee pages...) And suspected avian flu in a few chickens caused the extermination of several million chickens in Thailand while I was there, a few years ago.
Swine flu has only caused death in those with weak immune systems so far, but the virus could mutate and become more aggressive - like HIV.
I suggest reading "Guns, Steet and Germs" as it gives a good argument for why some societies survived while other perished. On a happier note, I hope you enjoy the barbecued pork.