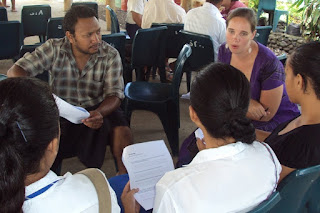 I apologize for this sudden lack of posts. As far as I can tell its reasons are twofold. For one, things have been busy. Surprisingly busy, in fact. I’ve been anticipating this break for 15 weeks of school, looking forward to a payoff of 3 weeks of nothingness. But I feel like it’s been a mad dash since I came back from Hawai’i.

Jordan administered the common assessment test to my year 12s the day after I left, and so I’ve had to deal with grading those and filling out the obnoxious stack of paperwork that goes along with them. Grading practicals for the file management unit is particularly tedious because of all the clicking through files and folders; it’s not something that can be skimmed like a multiple choice test or done piecemeal like a series of free response answers.

Then there’s been a host of Rotaract activity lately. Those kids generate so much email per day, it’s almost like being back in The States. This morning Blakey’s “Job Shadow” program kicked off as year 12 students from Apia schools were paired up with young professionals from the area. There were representatives from Polynesian Radio and TV3 and the South Pacific Regional Environment Programme and many more. The kick-off event was a success. Blakey was center stage. I oversaw the refreshments and stacked chairs.

I’ve been reading “The Girl Who Kicked the Hornets’ Nest,” the final installment of Steig Larsson’s Millennium trilogy. The book, which I finished last night, is action-packed and 743 pages long (Editor’s Note: The series, which I cautiously recommend, is something along the line of “Law and Order: SVU”, is not for everyone. Parental discretion advised.). Though I got through the book relatively fast for myself—I’m a slow reader—it was 743 pages long. I finished at 1:49 a.m. today.

Briony left. Briony have become pretty good friends since she moved to Apia. She and me and Nate the Kiva volunteer have had a standing date for drinks every Wednesday for the past couple months. He returned to America while I was in Hawai’i, she went back last night. So a bunch of us have been going out to dinner to celebrate Briony’s fa’amavae. It was sad to see her go, but I think the weekend was a proper send-off.

There’s also a VAC meeting coming up, and I’m on the VAC committee and there’s ish to be done. My friend Dustin flies in tomorrow morning, so I’ve had to get ready for his arrival. I’m in charge of compiling grades for my whole school. I’ve been trying to track down a guy at the Electric Power Company regarding the “Independence Day Quiz” that will be televised on TV1 that Rotaract is organizing. So all in all, it’s been a whole lotta busy.

Here’s the second, far more ominous reason: The blog is getting harder to write. I never wrote a blog while I was in The States because it was difficult to pick out noteworthy pieces of life to share with the world. When I moved to Samoa, everything was so insanely different from my old life, it was easy to write 500 words out of thin air. But now that I’ve acclimated to life here (see post below), Samoa’s eccentricities are a little more subtle. I have to reach a little farther.

I hope you're well. Pictures below. 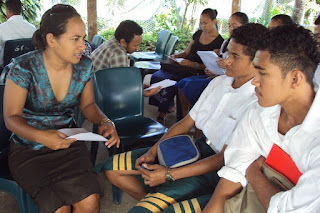 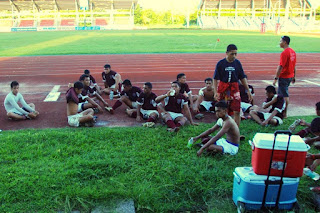 Oh! And the Smoke Free Rugby tournament is going on this week. See. I'm telling you. There's so much going on right now. 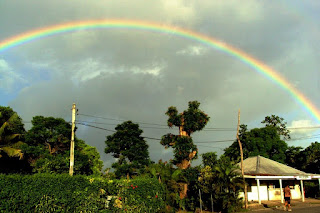 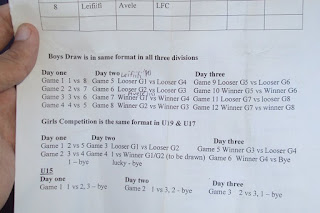 It was already a funny chant because of its stupidly simple lyrics. But then one time an RA in one of the dorms made a series of banners with the lyrics, and the last one he wrote "loose" instead of "lose", making the stupid words even worse. I was reminded of that reading the Smoke Free Rugby Tournament schedule above.

Greetings from USA!
Please visit me at
http://blog.sina.com.cn/usstamps
-Tong

Is Dustin there? How was his flight and what's his first unusual experience?

Make sure you put the Ghiradelli in the freezer - I think they're globs by now since they've been to Hawaii and back and now to Samoa.

By the way, what did you think of "In Defense of Food"?

Barb Carusillo said...
This comment has been removed by the author.
3:29 PM