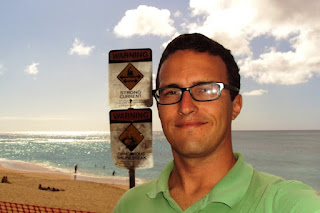 What a difference a year makes. This time last year, I returned to Samoa from New Zealand in a state of melancholy. I’d been living in Samoa for 7 months, but coming back after 10 days in Auckland didn’t feel like coming home. I was wary and a little homesick, and the thick Samoan humidity I felt as I deplaned was a punch to the face. Coming back was a major downer (you can re-read the full account here.)

Getting off the plane today was different. I was a little anxious about getting my case of Guinness through customs, but beyond that, my only feeling was one of relief.

Don’t get me wrong. I loved Hawai’i. It’s a beautiful, warm place, and I had a great time. I drove a car, played cards, and sipped Starbucks. I swam in the ocean, ran along the Ala Wai canal, and ate Brie. Despite all this, walking into baggage claim at Faleolo Airport here on Upolu, I smiled.

Why was coming back so lousy last year and so comfortable this time around? It’s hard to say.

Time-wise, Group 81 is just about 75% through our time in Samoa, and I think we’re starting to feel a “senior year” sort of buzz. There are still 2 terms of school left, and there’s lots and lots to be done between now and the time we leave. That said, the term “home stretch” is becoming more and more a part of our daily lexicon, and that’s always a nice place to be—even with the inevitable culture shock that awaits us in The States.

In fact, returning from that culture shock was also part of the relief I felt getting off the plane. The customs officer threw me a big “Mālō” as I approached the counter, a term that seems considerably less foreign than aloha. I think the cultural difference between Hawaii and Samoa is relatively less severe than the difference between California and Samoa, but I’d say the shock was still omnipresent this past week. It’s a sort of feeling of unquenchable urgency and strange displacement. At this point, my mindset is pretty darn Samoan, and it feels good to be back.

It’s the same sentiment as Green Day’s “Welcome to Paradise,” a song about a boy who moves to an urban slum and writes 2 letters to his mother: the first, written 3 weeks after he moves out, laments the harsh conditions of his new life; the second, written after 6 months, celebrates the same conditions. It’s all about that feeling of ownership and control. Despite the chaos and confusion of my life in Samoa, I’ve grown to enjoy it here, and even feel a little bit of control.

I think we’ve crossed over.

Speaking of the joys of chaos and confusion, my power just went out. My laptop battery ain’t what it used to be. So I think I’ll stop here. See? Look how in control I am. 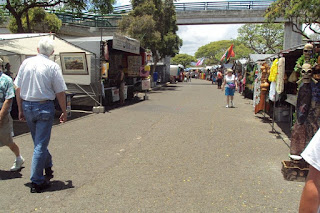 The Honolulu Swap Meet. Every Wednesday. 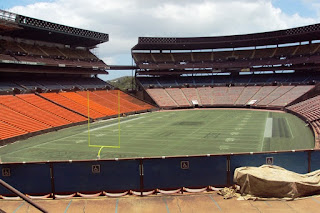 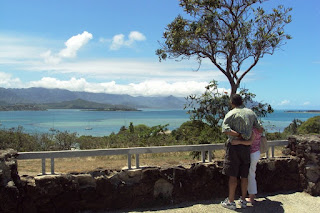 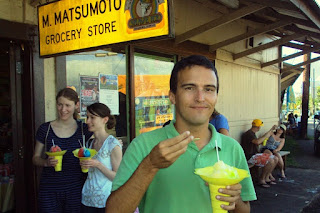 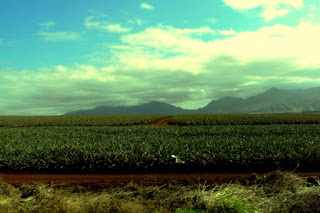 Pineapple field. Or is it Patch? 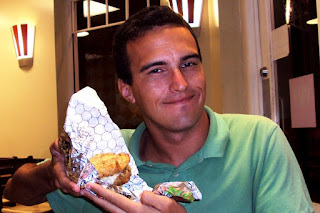 Me and the Kentucky Fried Chicken Double Down. I actually found the "sandwich" to be bland. 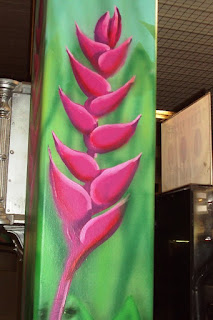 The national flower of Samoa, the Teuila, painted on the column of a local mall food court. 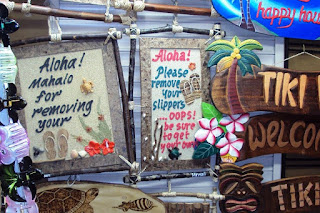 This frame says, "Aloha! Please remove your slippers ... oops! be sure to get your own!"
I saw many of these, word for word, while I was in Hawai'i. What in the hell does than mean?
Posted by Matthew at 11:59 PM

Labels: Moving On In, Off the Island

Ballsy putting that picture up at Matsumoto. Rude. I hope you had a fun last day and I'm glad Samoa feels more like home. Don't try staying there though, I'm gonna need you home soon.

This ere not blogging for days is not gonna fly. I have needs and you've delivered on them for almost 2 years now. So stop laying around the pool so much and pick up the laptop again. By the way, you should totally stay in Samoa longer for an extended period and get more native. Grad school can wait, and you will hate it anyways.

You will definitely homesick for Samoa when you return to the States. You will get annoyed with how people in the States behave, believe that will happen. There is no place like SAMOA.

lol @ those slipper signs... think i need to get one of those and put them up at my nans place in savaii where on last trip there, i took my shoes off at the door... 3 hours later came out to find them gone, 2 days later i saw some randomn in the village wearing them (ok so maybe randomn was part of the church youth or something - still randomn since i didnt know him! lol