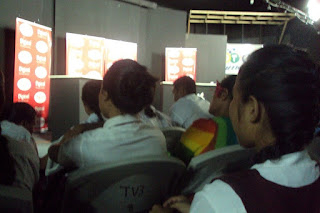 I lost with the word “sandwich”. It was first grade, and the bee was held afterschool in room 9, where Ms. Hawkins read the words. Everyone stood up, and we went around the classroom. If you spelled a word wrong, you sat down. The last 5 students left standing went on to the finals. After however many rounds, there were six of us left. I spelled it “sandwitch”. And thus the qualifying round ended. That was my one and only spelling bee. Today I got to be a spectator.

Digicel is sponsoring a 10-week televised spelling bee in which year 10 students from 12 different schools compete in pairs against one another. I’m not really involved, but I ran into Thanpuii after school today, and she invited me to come along. “We’re leaving at 10 after 2,” she told me. “Can you be ready?”

We shuttled over to TV3, and after a brief wait in the lobby, we were escorted into a small studio. After a long wait during which we watched one of the “Mighty Ducks” sequels with the sound turned off, there were a couple speeches and the tournament began.

The bee worked like this: a moderator read a school subject, a point value, and then the specific word twice. At that point a team could buzz in to answer. It was announced at the beginning words would not be used in a sentence. All words were to spelled in British English except when the school subject was Samoan, in which case contestants were required to denote komalilius (apostrophes, as in fale’oloa) and fa’amamafas (lines over vowels, as in sē) . Each match was 20 minutes of spelling, which is a long time.

Enforcement of the “don’t ring in til the word’s been said twice” rule was arbitrary. Also, scores were hidden most of the time, which made it difficult for a team to keep a grasp on their progress. My school didn’t play until the second match, so I kept score with my own pen and paper. It was a barn burner.

Here are some words I had problems with:
Perhaps the funniest part of the two matches was when the word dam came up. The first team spelled it “damp”, so the other team got a crack at it. They spelled it “damn”. Context! Context!

Overall, I was impressed at how well everyone did. There were some tough words: mountainous, farrowing (MS Word doesn’t recognize this word), rhythm, chlorophyll, indigenous, requiem, and epididymis (Word’s shaking its head again).

In the end, my school beat out Faatuatua Seconday, 135 to 130—a barn burner indeed.

Update! Farrowing means to produce a litter of pigs. Epididymis is also a word, but I'll let you Google that on your own. 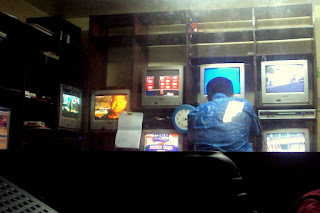 The control room. Through this window we watched D2: The Mighty Ducks with no sound. 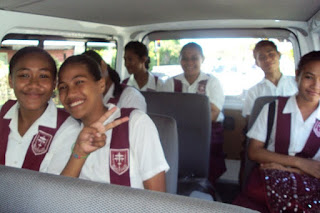 Inside the van on the ride over. The two girls who represented our school are in the far back, Racey and Tinousi. Sorry about the lack of focus. It was that sort of day.