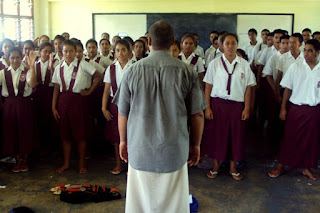 I admit I still don’t understand iambic pentameter. I’ve understand that it’s “da-DUH da-DUH da-DUH da-DUH da-DUH,” but I’ve never been able to hear that as natural. But as much as I’m no poetry connoisseur, I know that rhythm and syncopation can be important poetic tools, although I don’t think that specific thought was in my head when I started practicing the poem with the 10.2 class. Mostly I figured having the kids read the poem to a beat would help them stay together. The poem is part of our school-wide English Day competition that will be held Thursday.

In regard to the poem itself, I feel a little ambivalent. Here it is:

Listen Teacher
Listen teacher
Listen to me
Don’t look away
See my eyes they hold messages
That can make you understand me
Hold my hand and your heart
Will warm towards me.
Let me dance and sing you
My own songs which you don’t know,
And you might smile
As you’ve never smiled before
Let me tell you a story
Of my ancient past
And then, maybe, you can see
Another person in me.
- Emma Kruse Va’ai

Bernie was originally going to be in charge of the poem, but he was absent the first day, so I took on the project. The kids had a tough time staying together, so I started clapping a beat. The rhythm we fell into was a staccato “DUH-da DUH-da dutta dutta DUH”. It didn’t work with every line, but we went line by line, and figured out the whole thing. When I heard the finished result, I realized the syncopation was similar to the rhythm we used during training when the guys did the “Slap Dance”, though I didn’t mention this to anyone. I didn’t need to. When another teacher heard it, she said, “Oh. You’re doing a haka.”

The haka is a sort of warrior chant. The Manu Samoa, Samoa’s rugby team, do a haka before each game to psych out the other side. It’s posturing as performance art. “Have them do a haka dance,” she told me.

So I went off with the year 10s to oversee the choreography and coordination of an English haka. Far be it from me to create a dance, so I used the method I learned last year: open up the floor. Students came to the front of the room, suggested a move, and there was a collective decision to incorporate or veto. The result is a weird mix of modern and traditional, but a pretty good haka, if I do say so myself.

I’ve tried to pull out all the stops too. Today I borrowed a pair of sticks from another teacher so I can do the percussion, and I think we’re going to perform it twice through—once normal speed, once fast. The kids really like the fast.

Reception so far has been muted. The other teacher came to rehearsal today, and nodded stoically when the kids finished, but smiled warmly at me when the kids left the room. The kids liked the idea at first, but their pretty over it at this point.

Although there was a telling moment after rehearsal today. We were sitting in the hall while another class was practicing on stage. It turns out they’re performing the same poem. I watched them, but I kept a close eye on my kids to gauge their reaction. The performance was good, but my kids smiled with quiet satisfaction. The other teacher winked at me. Ours is better. 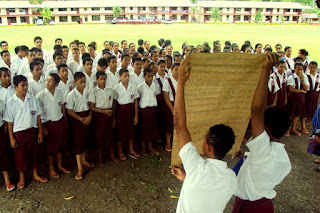 Our "house" learning the song. 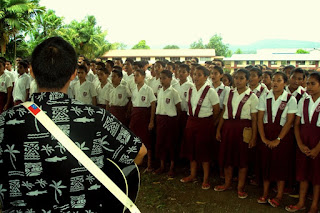 I love this poem. Did you have a video of your class performing it?