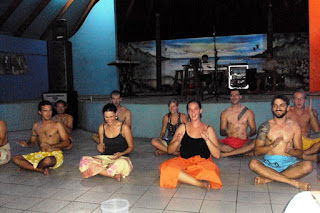 Avenoa Tutusa, Peace Corps Samoa’s non-profit cousin, current President Joey 81, held a fundraiser at Maliu Mai last night, and volunteers showed up in droves to help out with logistics and to provide entertainment in the form of traditional Samoan dances. A $5 admission was charged, and Fono and his band performed.

Sometime around 7:30, Blakey came around and told volunteers to prepare for the dances. I think there was a short rehearsal yesterday afternoon, but I missed it, so Blakey’s warning was a cue to re-learn the dance I’d be performing in about 10 minutes. We also had to regale ourselves in lavalavas and pulatasis.

Our self-sufficiency at preparing for events like this is a testament to how far we’ve come. During training my host mother would correct the way my lavalava was tied. Often putting her arms around me the way a parent might adjust the diaper on a 2-year-old. I’m proud to say I can do it all by myself now.

I also brought a beaded necklace to wear during the dance. “Where’d you get the bling, Matt?” Erin asked.

Re-learning the dances is fairly easy because the dances themselves are rather basic. For example, each 8-count in the boys’ slap dance begins with the same movement; only the last 2 beats vary, and even those variable moves repeat. It’s simple enough for white boys like me to retain.

The sāsā is slightly more complicated, but it’s choreographed to tell a story, so the progression is pretty easy to remember. It’s essentially a rhythmic demonstration of the process of making pe’epe’e, salted coconut cream. After the “Talofa!” part, the dance simulated climbing a coconut tree; husking, chopping, and scraping the coconut; and then gathering, squeezing, and salting the flesh. Easy enough, right?

The other saving grace is that in both dances, the entire things is performed twice: once at regular speed and once fast. This means if you screw up the first time, you get to redeem yourself during the second go-around.

There was much screwing up last night, but I like to think the flaws are what gave it that cute palagi charm. Right?

The event was a success, bringing in ~$850 for Avenoa Tutusa. And Dustin got to see some authentic imitated Samoan culture. 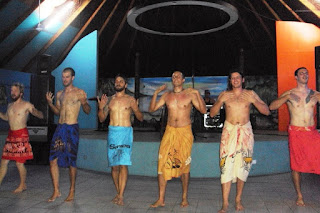 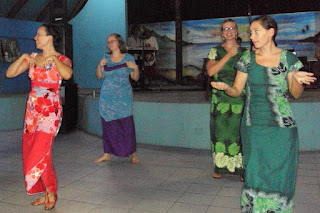 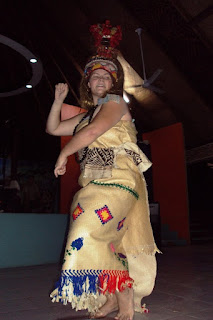 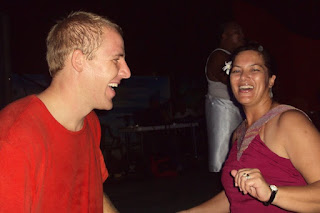 Dan and Medical Officer Teuila out on the dance floor. 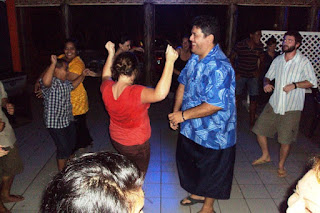 Looks fun...wish I were there to witness it all!

Oh, speaking of un-academic posts...here's an "academic" comment for ya:

wow...your having to much fun over their! lol. all those other people in the pics and there moves look groovy!! seriously, lol...

ok, that was a shout out to Dustin. Feel free to remove now.

woah! look at those new tabs on the top. you are fancy.