What Do We Say Always Comes First? 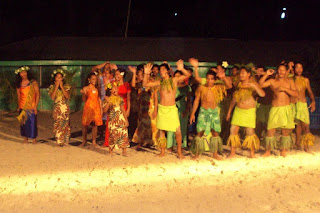 Breakfast this morning was a little awkward. Dustin and I sat across from a German couple who spoke almost no English, so we wound up talking to the English speakers to our left while the Germans spoke to the Turkish couple to their left. As strange as it was, it felt a little like a literal International House of Panekeke. And though the meals aren’t served “family style,” eating at a long table with a bunch of people—even though most of those people are strangers—makes everyone feel like family.

During my family’s visit to Hawai’i earlier this month, we hit up Germaine’s Luau, where they set “family” as a focal point—not in the sense of “good, wholesome entertainment” but more like “we are all on this bus together and therefore we’re family”. It’s certainly fun. The bus leader referred to himself as “Cousin” and I swear the guy used the actual word “family” 400+ times during our 40 minute bus ride. It was nice, but not completely authentic. Tanu Beach Fales, on the other hand, is the kind of place that makes you feel guilty for not calling enough.

Tanu Beach Fales in the village of Manase on Savai’i is slightly less overt. They highlight the fact they’re a family-run business during the after-dinner Samoan Culture Show, but by then you’ve already been immersed in the Tanu family.

Samoan children litter the compound, playing games or running feaus or napping out in the open. Adults sit in family’s open fale talking, eating, cooking, barking orders at children, etc. There’s a palagi who works the reception desk; I’m not clear how he’s specifically related, but I’m sure he is somehow. How could he not be?

The after-dinner show showcases children, adults, and seniors alike. Suddenly the girl who brought an extra mattress to our fale and poured our tea at breakfast performs a siva Samoa in full traditional regalia. This morning the kid who did the siva afi, the fire dance, last night was walking around with a circle saw helping his cousins (brothers?) construct the floor of a new fale.

It inevitably makes you wonder what it would be like if your family ran a beach fale resort by day and performed a show at night. It would be like the Swiss Family Robinson and the Partridge Family merged and ran a hotel.

In any case, this atmosphere makes you feel like less of a “customer” and more of a “guest”. This morning Dustin and I walked to the front desk to ask when the bus for Salelologa would come. The guy behind the desk, not the palagi, was the emcee for last night’s show, with whom I’ve never spoken.

“Hey Matthew,” he called out as I approached. “You know anyone here named Niko?” I have no idea how he knew my name, but his tone was so casual I might as well have been a Tanu myself.

And I must say being a Tanu looks like it would be pretty fun. As long as I don’t have to do the fire dance.

I hope you’re well.  Picture below. 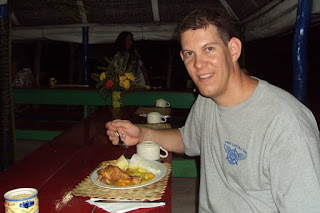 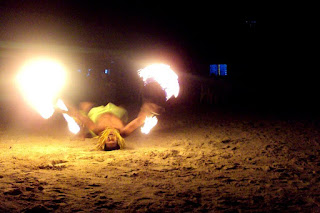 Fire Dance during the culture show. 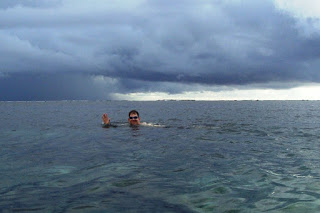 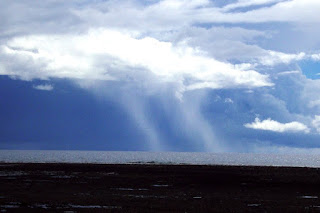 These 2 dust devils showed up just off the coast about an hour before we headed out.

Labels: Out and About, Savai'i

You're so spot on with the Tanu's setup. The beach front fales are nice and the food is decent, but really it's the Tanu family that makes 'guests' come back several times.

on a side note.

Go Savaii..most people on Upolu live most of their lives without ever travelling to Manono, Apolima and even Savaii.

Your pictures of your adventures during Dustin's visit are awesome. Thank you so much!!!