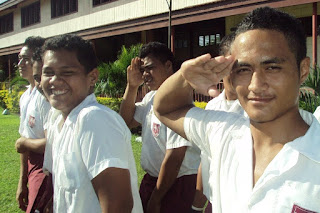 As soon as it was figured out Dustin would be at my house for the first day of Term 2, I quickly realized what a non-issue the whole thing would be. In fact, when they handed out the academic calendar back in January, I immediately found it peculiar we’d start Term 2 the day before Samoan Independence Day. The first day of a term, already a completely underwhelming occasion, sandwiched between a weekend and a two-day holiday? Pshaw.

I must have articulated my prediction for today’s schedule at least 50 times over the last month and a half. It goes like this, “My bet is we will all show up, we’ll practice marching for an hour, an hour-and-a-half, and then we’ll go home.” This is almost exactly what happened, the one exception being we had an assembly where it was announced students wouldn’t have to come back to school until next Monday. The academic intensity of this term doesn’t instill too much apprehension at this point.

Last year Term 2 started the Monday after Independence Day. And from what I hear, last year was the aberration. The problem was Term 2 needs to be 12 weeks long to fit in all of the curriculum required (since Term 3 is supposed to be wall-to-wall review), and if those 12 weeks don’t start until the week after June 1, the last week of the term overlaps with the Teuila Festival, which is lousy. Also, within the Congregationalist school system, the final prizegiving last December was the 11th. This year the last prizegiving will be the 3rd. I’m particularly happy about this since we’ll be last this year. So essentially we’re claiming we have school this week even though there will be no instruction so that we can celebrate the Teuila Festival and get out a week earlier in December. Cool with me.

Not cool with me was arriving on campus early this morning. Even with my half-cynical,-half-realist prediction for today’s schedule, I managed to get to campus this morning at the normal time, only to be greeted by a very slow trickle of students and staff. I showed up before 8:00, and things didn’t actually get going until 8:45 or 9:00.

Later I found out the collective tardiness was due to fautasi races (long boats with ~50 paddlers) in Apia Harbour this morning. I grumbled a little—I would have liked to watch—but the half-assed nature of the day blunted my frustration.

After the short assembly and the marching practice, the teachers had a meeting where it was decided we’d all show up on Thursday and Friday of this week so we could finalize grades for Term 1. I have elected to compile grades for the entire school, so I’m a little nervous about Thursday and Friday. That said, I got a lot of grades turned into me this morning, and they’ve already been entered into the computer. I’m in good shape, and in that sense today was surprisingly productive—so productive, I say we take the next 2 days off. 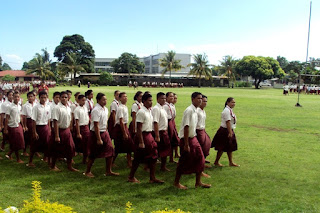 Marching around the field this morning. 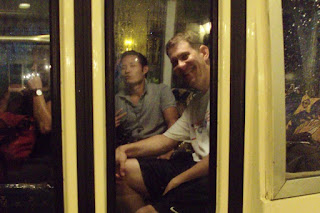 Supy and Dustin on the airport shuttle. 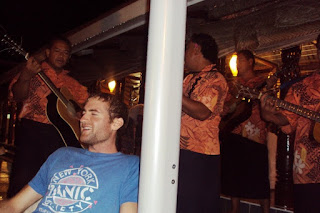 Trent and the Aggie Grey's Samoan Mariachis this evening.

I think the Samoan education system lost all respects for education for the children. It is a waste of time to dedicate that much time to marching or practicing for a festival. I would say more attention to education and less to frivolous things.
GO BLACKHAWKS!!!

hi, you have nice blog.. u can view also mine..http://akoniwares.blogspot.com

hey how did the custom made shirt fit?? :)