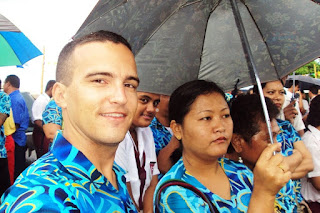 Our call time was 6:00 a.m. I woke up at 7:20. I’m not clear on why we were supposed to be there so early. Rolling in 2 hours late, there was still a whole lot of nothing to do. I stood under part of an umbrella most of me still exposed to the rain for the good part of an hour and a half, waiting patiently for our chance to march in the parade. At one point I turned to Maengi and said, “We should have showed up later.” She agreed.

When I was in high school, my school’s marching band was invited to march in the Macy’s Thanksgiving parade. Though I had no part in marching band or the colorguard auxiliary, I maintain bragging rights. Most schools need to submit an audition tape; we were invited. In any case, I’m not sure the magic of this morning compared to marching down the streets of New York in a nationally televised parade. Nonetheless, excitement was in the air this morning of Samoan Independence Day.

I missed last year. I flew in from New Zealand on the evening of Independence Day after all the festivities had ended. As much as I was assured by my fellow Peace Corps that I hadn’t missed much, I still felt a twinge of guilt, and so I was quite happy to show up this year, in style and on time.

I probably would have shown up earlier had it not been for the Indian missionaries. Maengi and Thanpuii had originally tried to get out of showing up all together with the excuse they hadn’t sewn their togigas, their uniform, yet. My principal’s reaction, “Don’t worry about wearing the uniform! You can come and march in whatever you like.” They came out of the meeting and told me I could share a taxi with them.

They figured we wouldn’t be marching until 8:00, so we wouldn’t need to leave until sometime between 7:00 and 7:30. I was brushing my teeth when Maengi called to me from the front of my house, “Matt! Are you ready? We’re calling the taxi!”

It’s a sad truth I try not to think about, but I from anywhere in my house I can easily shout and be heard by someone standing outside my front door, “Yeah. I’ll be ready!”

Traffic heading into tiny Mulinuu (translated literally: the end of town) was dense, and eventually the cab driver suggested we get out and walk. It was raining and, getting out of the taxi, I regretted not brining my umbrella. Thanpuii and Maengi both brought umbrellas, albeit very small ones. Thanpuii shared with me as best she could during the walk. By the time we arrived, the right side of me was drenched.

The “parade route” was extremely short. We all lined up at the back of the field and then marched about 100 metres past the grandstand, and that was it. There were all kinds of VIPs and the Head of State looking out, so I wouldn’t call the event anticlimactic, but as I said, it was rather short.

Walking home, we realized we still had time to make McDonalds’ breakfast. The Egg McMuffin was the highlight of my morning. 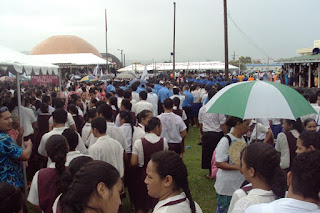 Hoards of people waiting to march. 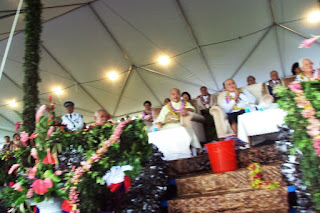 The Prime Minister and Head of State. Pardon the blur. 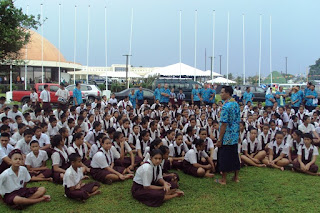 My school briefly met after the march. 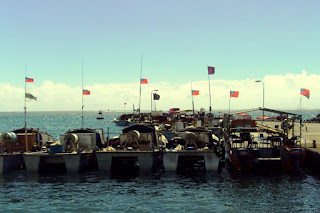 Boats in the harbour Monday.

Nice uniform, nice haircut and not so nice weather lol...