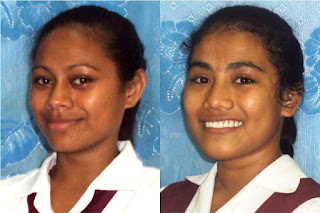 I lost my ID so many times growing up. I loved getting a new ID at the beginning of the year, and I’d stick it in my pocket and carry it around for no particular reason, and then it would be gone. In high school our high school had to be visible on our person so it was a bigger problem then, but in middle school I think it was so easy to lose my ID because it never had much use. What was the point? I was reminded of those halcyon days while making IDs this morning.

I’m pretty sure my pule woke up in the middle of the night, sat straight up, and epiphanically screamed, “IDs!” As I mentioned in Odds and Ends yesterday, he was giddy as he guided me through his big presentation of this ID card business. “They can use it to check out library books! They can use it like a passport!” I don’t know what he meant by that second part—or the first part for that matter—but he was clearly excited about the idea, and I don’t want to rain on that parade.

So I took ID photos of the prefects after school yesterday. I positioned the chairs at a ~15° angle and had them turn their head to face the camera as I’ve been taught to do.

When I was a manager for Union City Leisure Services, I was the ID photographer, and on occasion someone would slide into the chair and mug for the camera. They’d try to be all stone-faced and hard, and I’d chuckle a little and say, “That is the lamest mug I’ve ever seen,” and if my timing was right I could get the person to laugh at me making fun and during that laugh I’d snap the picture. I was a natural.

But yesterday I was flustered and in a rush, and I let the muggers mug. In fact, I was pretty skeptical of the pictures I took yesterday, but for the most part I was able to take care of everything in post-production. With some strategic cropping and some manipulation of contrast and hue, I was happy with the photos.

I slapped the school crest on there, and my pule had asked for Date of Birth (says Maengi, “I don’t want to walk around with my date of birth for everyone to see!”.

We printed the first sheet of badges in my pule’s office this morning. I’d designed them so they’d print to exactly the right size, but I didn’t tell my pule this. It made for a slick moment when I slid it into the badge holder and it fit exactly. “Awww! Seki a!” he cried.

His satisfaction can hardly be overstated. As far as job execution goes, I think the final product I put out was pretty darn close to his vision. And it always feels good to have an idea come to tangible fruition.

We laminated the cards. I assumed I’d be doing this with the school secretary, but instead my pule followed me to the school library, where he rolled up his sleeves and went to work with the laminator.

I’ve definitely had that moment of stationery euphoria at Kinko’s. I know the feeling. 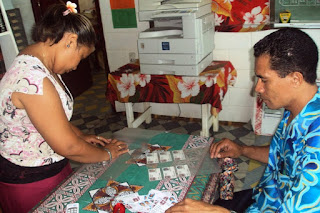 Our school librarian and pule put together laminating sheets.