Too Little Too Late? 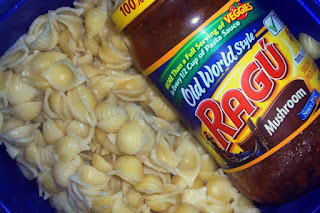 It was at the Peace Corps Cinco de Mayo celebration I agreed to run in tomorrow’s 10k. Phil was discussing his training regimen with Joey 81, and I jumped in. “I want to do it,” I said. And Joey nodded. Joey is the Peace Corps’ liaison with the small sports store, Coaches Corner, that coordinates tomorrow’s races—in addition to the 10k there’s a marathon and half-marathon—as well as the long-distance relay race that will happen again this year on the last Saturday in August.

I have barely trained since. With the heat and the end of Term 1 and Dustin’s visit things have been busy in Samoa this past month. I managed to fit in two jogging sessions while I was in Hawai’i, which were surprisingly easy considering my recent lack of exercise. I also went for a run this past Tuesday, which went okay. Later Tuesday night I fell and injured my knee, and I’ve been warming the bench ever since.

My knee feels much better today than it did yesterday, and yesterday it felt much better than it did the day before, so I think I should be good to go tomorrow morning. In fact, this small immediate problem seems a little inconsequential compared to the whole not-training thing.

The last time I ran 6 consecutive miles was when I ran the San Francisco marathon in August 2008. Even during last year’s distance relay my longest leg was only 3.67 miles. So I can’t help feeling a little nervous about the distance.

Earlier tonight, Phil mentioned his goal tomorrow is to complete the race without walking. “I want to run the whole thing,” he said.

At the risk of sounding like I’m setting the bar as low as possible, I feel like I have no specific goal for tomorrow. I know that I will complete the race no matter what, and given my lack of training, I don’t feel especially motivated to finish in a certain amount of time. Rachel and Lily estimate there will be 45 people running the 10k tomorrow, and I don’t want to finish last. But the race is being advertised as a “run/walk,” so I don’t think there’s any danger of finishing last either.

Given this lack of training and goals, tonight’s pre-race routine feels a little loose. When deciding on a plan for dinner, there was discussion over whether or not to carbo-load. “Given our lack of training,” said Phil, “carbo-loading seems like a fart in the wind.”

“Sure,” I said, “but it can’t hurt, right?” This is also funny because I’ve never been convinced carbo-loading makes any difference.

In any case, we had pasta for dinner. And we’ll have some protein and a piece of fruit in the morning. And we’ll try and get to bed early. But really, I’m not going to put in too much effort. I’m just trying to not come in last.

I hope you’re underwhelmed. Pictures below. 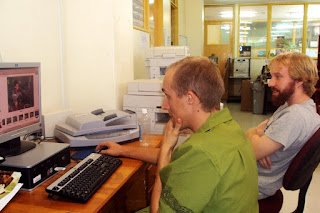 Benj, Casey, and I met today to discuss pictures for a PowerPoint presentation that will be emailed to prospective members of group 83. 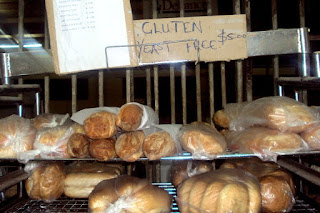 Labels: Out and About, School Break

I thought Benji left the peace corp a long time ago. Our church have gluten free hosts, never thought I would see that sign in Samoa.