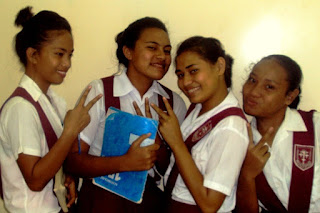 My free time lately has been wall-to- wall with “The Wire” lately, a show in which blind loyalty toward one’s co-workers, whether they be police or drug dealers, seems to be valued above all else. I think I had a pulse of that mentality running through my head today. That and any time there’s a classroom full of students and things are on certain path, it just seems easier to ride them out rather than to try and turn the boat around.

As with anything, it started out innocently enough. My 5th period year 13 class had ended, and I have a prep period 6th, so I sat at my desk playing Minesweeper while a few of the dawdlers finished up their assignment. I’d shut off the rest of the computers in the lab, and had 2 more minutes passed, I would have been out of there, finished for the day. But then the door opened.

Three girls from the 11.1 class poked their heads in. “Where is Mr. Tulei?” Mr. Tulei is the other computer teacher at my school. He was hired back in February, and though we never really hit it off socially, we have a good working relationship. “Are we having class in the lab?” the girls asked.

I didn’t know the answer to either of their questions. I don’t keep tabs on Mr. Tulei, and I had no idea what his lessons plans for today’s class were. But I had seen him in the lab with the 11.2 class earlier today. They were taking notes on spreadsheets. Adding all this up in my head, I figured it was likely they were indeed having class in the lab. I told the girls as such, and soon 11.1 came flooding in.

I hurried around the room turning all the computers back on; I wouldn’t have turned them off if I’d realized there’d be another class today. I logged them all in and then setup the teacher computer to broadcast the spreadsheet lesson. The kids sat on the floor, squawking and squealing. There was still no sign of Mr. Tulei.

At this point we’re 15 minutes into the period. It seems silly to let the kids sit around and do nothing in my classroom, but it also seems like we’ve come too far for me to send them back to their classroom to wait out the period there. What to do, what to do?

So, feeling that surge of loyalty and covering for my comrade, I taught the lesson.

But of course the kids have 30 different opinions on where they ended last week and where I should pick up. Also they have a terrible time getting themselves focused after 15 minutes of sitting around. Also there aren’t enough chairs. Also there are a ton of new faces, and though I taught this class at the beginning of the year, I remember maybe 10% of their names.

And to think, if I’d just left 2 minutes earlier I would have had a free period. 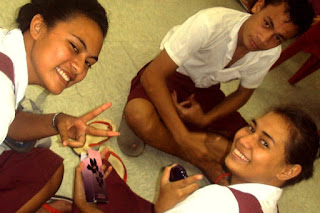 At one point the girl on the right, Ruby, took out a bottle of perfume and sprayed it on herself and the boy and the other girl in the picture. They were bored floor-sitters.

Matt, what's the go with the fingers? Having been a dedicated reader I have noticed that the kids and sometimes adults in photos on your and other pcv blogs all do the same finger gesture in photos. What does it mean. Please don't tell me it is some gansta rap thing,
Ps not logged in but I emailed you earlier in the year about coming to apia with my med student husband ( my name is keiren, his Paul). We arrive in three weeks!!!