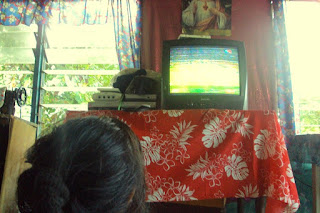 During the last World Cup I was teaching summer school in Oakland, and the many of the games conflicted with my teaching schedule. So I recorded them on the DVR, much to my roommates’ annoyance. 6 hours of soccer every day takes up a lot of memory; add that to my other two staples, Jeopardy! and The Daily Show, and I was suddenly a memory hog. Was it my fault for being into the World Cup, or were my roommates out of touch with the world?

From what I’ve seen, Samoa would side with the roommates. Samoa does not have World Cup fever.

First I need to draw a line here. I have Samoan friends who are very excited about the World Cup. One was all too tickled when it almost looked like New Zealand was going to make it out of group play into the bracket. Another posted a Facebook comment admitting she had a tough time following the competition because she’s been too busy ogling the players (It was a bluff. She was the one who broke the news about New Zealand not making it.). Clearly there is a sub-culture of young urbanites who are emotionally invested in the World Cup. But it seems like the rest of the country’s interest is fleeting. Sounds like America, doesn’t it?

I admit, my host family’s TV was part of the allure of visiting the village this past weekend. TV1 has agreed to show all 64 matches, which seems like a lot until you consider matches air at 12:30, 3:00, or 7:30 a.m.—not exactly prime time. When I asked my family the night before if we could watch US/Ghana, they seemed baffled as to why such a match would be shown on Samoan TV, but they agreed to let me watch anyway.

It’s a little strange because living in America, I always felt we were in some soccer bubble; as though everyone else in the world cared, and we just couldn’t find it within ourselves. When I signed up for the Peace Corp I had this romantic notion of finally witnessing the supposed madness that America can’t seem to catch. Yeah, that didn’t happen.

On the other hand, as with other World Cups, I have been impressed with the people who rise to the occasion. I always thought Maengi was cool, but since she’s been consistently going to bed right after dinner in order to wake up for nearly every game, my respect is at a new level. Hell, she keeps a packet of papers next to her couch so she can track the tournament.

The one thing that felt cool about watching TV in the village was the tentative reception pulled in by the makeshift antenna. With the fuzzy picture and the snow coming in and out, often during important moments in the game, I felt both the isolation of south-island Samoa as well as the global connectedness that every World Cup spectator feels. 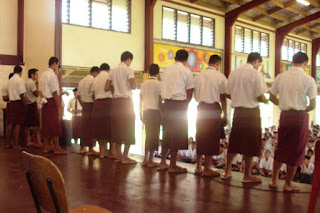 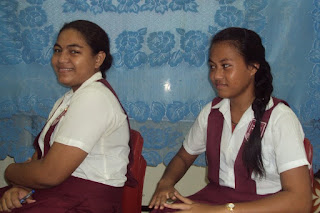 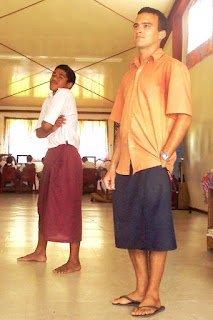 I was working on the introductory slideshow for Group 83, and I needed a picture of a male teacher in typical teaching clothes. So I turned the camera on myself. That kid in the background was only too happy to jump into the frame.

I have the fever. I'd also say the U.S. is definitely getting more engaged for this Cup than last. There weren't people screaming outside/car horns going off when the U.S beat Algeria, but there were many people watching at 7 am

P.S. - I'd like to see a new country win the World Cup. Rooting for a Ghana/Netherlands vs. Spain final.