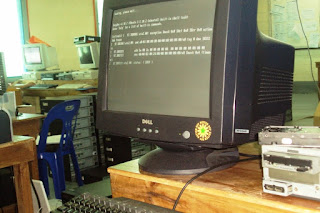 I’m almost qualified for my job now. The main thrust of my job, teaching computer classes, has always been within the scope of my ability. Sure, I’ve never had a teaching credential, but I’d say I have good teaching instincts and I’ve been capable of that all along. It’s the fixing hardware issues and speaking Samoan and maneuvering staff politics and living without hot water in which I have no background. But at this point I think I’m finally qualified.

At my Peace Corps interview the lady sitting across the table told me that engineers and other highly qualified computer professionals often find teaching computers to complete novices to be below them, which is understandable. It doesn’t make sense for a networking whiz or a systems expert to teach a 14-year-old to use a mouse.

But it would be nice to have a little more expertise in Microsoft Server. Also I came in to this knowing almost nothing about hardware. But I’ve learned plenty about both.

Sometimes I forget what recent experience has taught me, and I slip into a pre-Peace-Corps mindset. For example, one of the Dells in my lab stopped functioning at the end of last term. When you pressed the power button, nothing would show up on the screen, and the system unit would make a high-pitched whining sound. My first instinct was to leave the machine alone and teach with one less computer.

And that’s what I did. But then yesterday—six weeks after the fact—I thought to myself, that’s probably just a RAM issue. The humidity here does funny things to computers, and with RAM all you have to do is take it out and put it right back in, and that fixes the problem. Sure enough, I popped them out and then popped them right back in. Success!

I also realized moments later I could consolidate parts from the machine missing a SATA cable and the other machine that needs a new power supply. Both of those have been out of commission for months. What a waste. I switched the SATA cables (and the hard drives for good measure), and now there’s a working computer at that station. Success again!

I’m not claiming to be an “expert”, but I have learned to deal with very specific issues in my lab, almost to the point I’d be willing to hire me to work here.

I’m not particularly good at living without hot water, and my bucket-laundry leaves something to be desired, but I’m functional. And that’s progress. 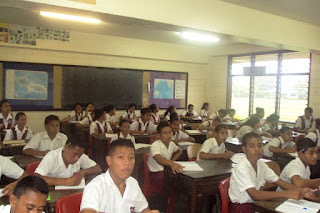 Notice anything weird about this picture? That's right. The lights are on. For the most part, there is more than enough ambient sunlight here that we almost never have to use the classroom lights. But today it was so rainy, the cloud cover so thick, we had to turn on the lights. It was crazy. 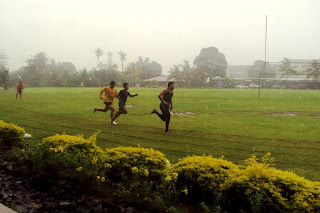 The kids from the school across the street racing in the rain.