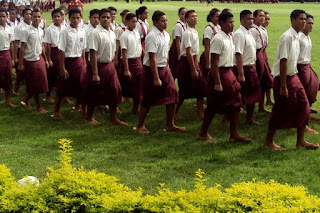 “Filipo speaks Samoan much better than you,” the girl told me. I was walking with a bunch of Phil’s family through the host village late one night during training, when his host cousin made this observation. I had 2 immediate reactions to this: 1.) Rude! 2.) Duh! The statement was obviously true, and I couldn’t argue at all, but she said it so tactlessly it stung. I had no idea how to react, so I shrugged.

Comparing one’s progress to someone else’s is important here. Students get a number grade (1 for a great test all the way down to 9 for a lousy one), but neither the grade nor the raw mark seems as important as a student’s rank. At my school, a report card shows how the student ranked within their specific class and within the entire grade level for each subject. A student in the 11.2 class would know the 37/100 she received on her English test puts her at 19th in her class and 64th in all of year 11. At Blakey’s school they report the median mark for each subject to give more context to how a student performed compared to everyone else.

I realize this practice is common in The States; believe me, I should know. I can recite my raw scores for the LSAT and the GRE I just took, but I can also tell you what percentile I fall into for each of those scores. Looking at different grad school programs, some schools tout their current students as falling in the top 5-10% of their undergraduate institution. Nonetheless relative rank feels like a much bigger deal here.

We discussed the topic a little during training. I told the story above—I kinda called out Phil in front of the group, which was awkward—and other volunteers could relate. When we had tests or presentations, our host families would grill us when we got home, wanting to know who did best and worst and where each of us fit on the spectrum between. Our Training Director HP explained it as an aspect of collectivist culture: the community needs to ensure you don’t fall behind. Collectivism is all about being a part of a group and keeping an eye on your status within that group. So people get all excited when this status can be quantified, as with a student’s rank.

On my walk home I was stopped by one of the year 12s who I know pretty well. “Who was first in my class?” she asked. Inevitably, the students who consistently rank highly are the ones who most interested in the rankings. When I told her I didn’t know off the top of my head, she got a little pushy. “I know you know,” she said.

By this time, she’s received all of her tests back; she must know she’s done well this term. But the rank. She was dying for the rank. I looked it up. She came in third. 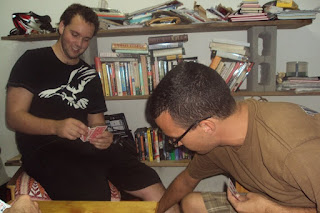 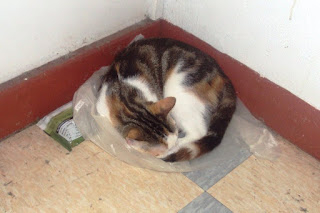 The cat, lacking social skills and a cushion, retired to a plastic bag in the corner Saturday night.

I love the idea that "the community needs to ensure that you don't fall behind." It reminds me of the old OM days - your success or failure depended on the whole team. Yet even with that belief, there is still the desire to be Number One.

So I wanted to comment on this when I read it but then I went and spent two days on a tiny island with no cell coverage or electricity (except when the generator was on between 7:30pm and 9:30pm).

Anyway, I was curious where you stand on HP's theory. At least from my experience at my school there was no use of the ranking to help ensure people were not falling behind. Ranking was used to determine who was best and then to allot to them all the best resources and effort while basically abandoning those who ranked poorly. I was constantly told not to worry about my 13.3 class, that I should only focus my efforts on 13.1.

In another example. At the end of the first term a 9.2 student came in at the top of the Year 9 level. This was found unacceptable, a 9.1 student should always be ranked first and they remarked the students so a 9.1 student came in first. Strangely enough the Year 9s are also regrouped at the end of the first term. So a really good student in 9.2 can be moved up to 9.1 and a really poor student in 9.3 might be moved down to 9.4. Why was it that they couldn't just accept that this 9.2 student who was so good should have been in 9.1 all along and allow her to keep her 1st place rank?

Anyway, my experience, everything in Samoa is a competition, be it school, sports or song and dance for Christmas and it has very little with ensuring that people are not falling behind.