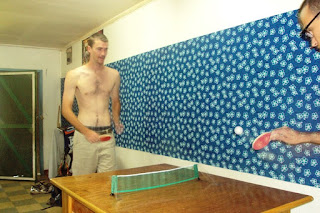 The race went as everyone had expected. Joey 81 finished in the top 3, Dan and AJ duked it out for second-place Peace Corps, Phil and I felt the burn. We arrived at the starting line yesterday morning shivering and pumped, and an hour-give-or-take-twenty-minutes later we were filling ourselves with niu and one-upping each other with how much we hated life with all of our aches and pains. There were no surprises.

In a way, that’s become our creed. Group 81 has been here nearly 20 months and we no longer raise an eyebrow to the ups and downs and the rolling with the punches. When the government made Monday (tomorrow) a holiday, we raised eyebrows in ambivalence not in protest. When two older ladies pummeled each other in the grandstand of last Thursday’s boxing matches, we stood in awe not in shock. When 4 mosquito bites showed up on my ankles after I turned out the lights last night, I cursed in regret not in disbelief.

To say Samoa is no longer new and interesting would be short-sighted; but the sting of surprise has worn off. We’ve come to expect the unexpected. No longer do any of these throw a stick in the spokes of my day.

Conversely, the yen for all things American has been blunted. The rich flavor of Mexican food, the steadfast wink of a hi-speed Internet connection, the satisfying whirr of downshifting has been dulled by drought. I don’t feel the gaping absence of my old life.

But wait. I also feel the complete opposite of everything I’ve just said.

I can’t wait to return to American with all of her mistakes and marvels. I feel the beckoning of the open road, the call of the spinach salad, the distant ringtone of the iPhone. After spending the past month-and-a-half with Americans who live in America, it’s almost too much to forget about the thrill of waking up fresh and rested rather than hot and sweaty. The In-N-Out Burger is so close I can smell it, if only for a moment, before I remember where I am.

Whereas Samoa’s unpredictability was once cheeky and charming, it is now outlandish and obnoxious. I find myself challenging the taxi-driver who tries to cut me off during my run, preemptively shutting down the vendor who tries to sell me matches while I eat, rolling my eyes at the children who shout “Bye-bye!” from the shop window.

I don’t feel particularly callous, only worn out. With 6 months left, I am beginning to see the end, and I feel my patience growing short.

Over the next 6 months I anticipate these contradictions will grow, creating anxiety and stress, and then will slowly begin to fade into inevitable ambivalent truths. Samoa will never be perfect, America won’t be the Eden I remember it to be, and the only thing true will be the memories of both. 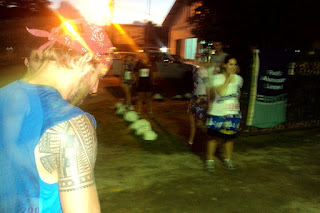 Arriving at the starting line. 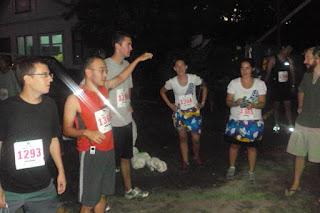 The team before the race. 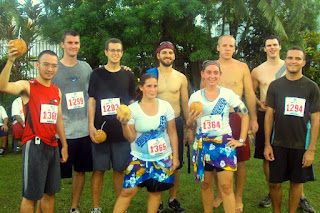 Kalofae... maybe it is time for your return to your normality.

Matt what will we do when you return ,your our link to Samoa .Hope to meet you on our next trip ,last trip you looked a litttle piss off , so we backed off, phone problem i think ,your posts take us back each day Aggie Greys pool never looked better, its 10 'C here.The western wourld has alot to learn from community based living [maybe a little alone time] alofa Anthony & Elena Fa'

what are we going to do when the samoa blog leaves us :(

it's good thing you're not staying for another year, or you will never return to the states, very nice blog and I agree completely with everything said in it, but you are not the same person who left 2 years ago. The good that we do in life will go a long way, even though we are not prime ministers, presidents, doctors, etc....