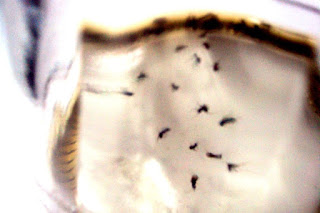 Not too long after I moved in I developed a healthy respect for the ants in my house, and our relationship since then has been mostly one of tentative roommates. I remember at USC Smadge had a roommate that was caught red-handed eating someone else’s food; I feel my relationship with the ant colony is similar, except when I catch them red-handed I can flush them down the sink. At first life was a battle, but I’ve learned to give them their space, and they seem to agree to keep their own low profile and leave my things alone. Until recently.

I’m not clear on the reasons behind what’s been going on lately, and I don’t remember exactly when things started. All I know is they reached their peak (hopefully) yesterday morning when I came across a trail of ants spanning my 18’ living room. In other words, if these ants were runningbacks, they’d only need another 4 yards to get a first down. I tend to save the bug spray for larger, creepier targets, but the ants had crossed the line.

I admit I’ve been extra irritable lately on account of my knee injury, so you might have to take my ant rant with a grain of salt, but this living room incident is the latest in a slew of ant mischief (Note: I’ve decided to upload a picture of my knee for emphasis and for medical purposes. It’s roughly the size of two American quarters, and quite gross, so I’m only posting a link. If you really want really want to see it, you can click here.).

The ants around the refrigerator have been going nuts for a while. They never work in long, thick trails, but seem to instead pandemoniusly run all over the flat panels of the fridge. I think they may be eating the glue that holds the sealers to the door jamb. The case of Guinness would on occasion make the door pop open slightly, and the tiny bastards would get inside to the food and wreak havoc.

They got into an unsealed loaf of bread and obnoxiously started working from back to front leaving nothing to salvage.

Last week I had a dinner of sapasui (Samoan chop suey) and chicken, and I left the remnant bones, along with a molding niu, in a trash bag to take out before school the next morning. By the time I woke up, the bag was so full of ants there was an audible hum when I agitated the bag.

Of course the worst is when you realize they’ve infiltrated after the fact. Last night—12 hours after I decimated the 6-yard trail—I ate the plate of food I received at lunch yesterday (We got 2 lunches. It’s a long story.). I ate the fried chicken right away, and then heated the curry on the stove and laid it out on top of the bed of cold rice. The curry was delicious, but when I got to the rice I noticed a single ant a couple of layers of grains beneath the top. As I dug it out with my finger, I noticed another. I scooped some rice up with my fork. Sure enough, there were ants in the cold rice.

Way to wreck a meal, jerks. 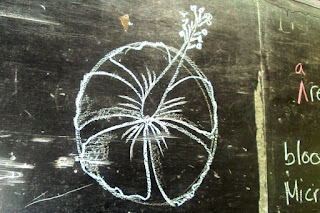 This hibiscus inscribed in a circle was drawn on the chalkboard in my 9.2 class when I walked into the classroom this afternoon. 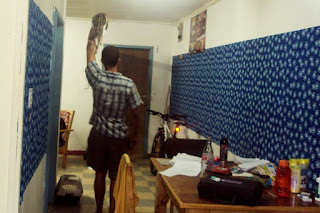 Sometimes when I'm bored I pick the cat up and raise her over my head and walk around the house. The cat goes along with it, more confused than anything else, and I get a fleeting sense of amusement.
Yeah. I live alone with a cat.

Is your knee infected? That does not look good.

I hope you know that you have an infection, and you are getting some antibiotics from Tuila. You don't want that cellulitis to invade your knee joint!

I agree, cellulitis is a nasty thing. Hope your knee gets treated.