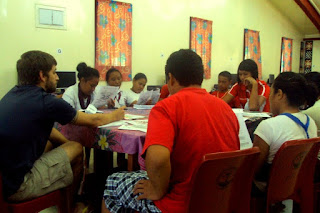 As sung to the tune of the Temptations’ “My Girl”: What can save 3 lives today? / My blood (my blood) / Talkin’ bout my blood... Senior year of high school my friend Melissa was the ASB Vice President, and among her duties was coordinating occasional blood drives on campus. The jingle above was a tongue-in-cheek ploy to recruit student-donors. There was also the Commodores spoof: And it’s once, twice, 3 lives you’re saving...

From what I hear, the process of recruiting blood donors in Samoa is generally more direct than the process in The States. When I lived in San Francisco I’d show up to the blood bank every 8 weeks, go through the process, eat as many Cheez-Its and pretzels as I could, and that would be that. Samoa’s population is considerably smaller than America, and their blood storage facilities don’t have much capacity, so the demand for blood donors only goes up after traumatic events where someone actually needs blood.

For example, there was a big bus crash in the village of Solosolo last December, and shortly after the incident, Joey 81 sent out a mass text asking for blood donors. Joey works for Red Cross Samoa, and is the natural Peace Corps liaison. But often, blood donation is simple and direct: if someone needs blood, often a family member will give a pint. Direct and intimate.

But that’s about to change. Joey and the Red Cross are piloting a program called “Club 25” in which giving blood regularly allows the donor membership in a club that will have fun and exclusive gatherings. I admit I’m short on details; everything I know I overheard after school on Friday.

2 weeks ago Joey texted to ask if I could gather a group of students so he could hold a focus group to garner feedback for “Club 25”. My year 13 class seemed like the ideal size and demographic, so after Friday’s Intramural track and field meet, Joey and the kids met in the computer lab.

I’d promised the kids I’d give them chocolate, and I had my pule remind students to come during his closing remarks Friday afternoon, but 5 minutes after school got out, only 5 students had shown.

Joey and the kids made small talk while I sprinted out to the bus loading area to see if I could rustle up 5 more. Joey asked for good English speakers, so I had to be careful about my choices.

Filifili, who graduated last year, happened to be back on campus to watch the track and field meet, so I made him come. I also spotted year 13 Luana trying to escape under the radar with one of her friends. I told her to go back and bring the friend too. And then, for good measure, I told Vincent from my year 12 class to go join Joey.

In the end we got 10 warm bodies at the table with passable English skills. Blood donation was definitely a foreign concept for the group; some were baffled, some were fascinated. At times, Joey had to pull teeth to get them to respond to questions. But on the whole, my kids came through. I gave them chocolate. 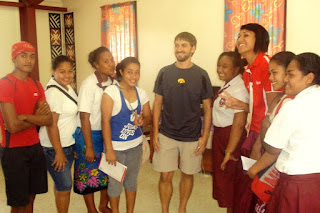 The kids insisted on taking a group photo once the focus group was over. It was cute. 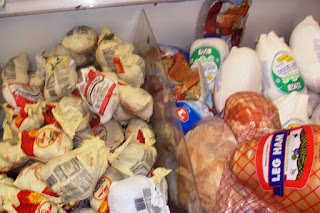 Phil snickered at the "gluton/yeast free" sign at Lynn's last Friday. But I found the freezer section at Farmer Joe's to be even more snooty. Yes, that's Cornish Game Hen on the left and whole duck to the right. Only the most gourmet poultry for us Apians.

Just like the expired medications that comes to Samoa, it looks the same with all horrible meat. Grow and eat the fresh food.

Focus groups are primarily used to explore issues and clarify how people feel about the topic under investigation. This step is important in ensuring that the focus group technique is the appropriate methodology and will guide the development of the moderators guide and recruitment procedures. Thanks...