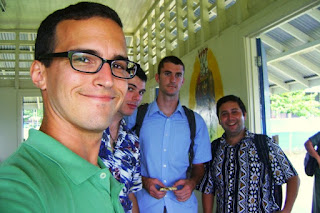 I’ve heard that, to a certain extent, alcohol consumption can increase language comprehension. It makes sense. Much like playing a musical instrument or playing sports or accomplishing most other feats, removing the analytical mind and letting intuition take over can often lead to a smoother performance. Playing piano at church, I would sometimes look down at my hands and try to hone in on just how the mechanics of the movement worked, how exactly my brain was telling my hands what to do. And it was precisely those times I’d screw up. Think too narrowly about anything, and the big picture is lost.

Phil, Koa, and I attended a Head-of-Department meeting for the Congregational school system today. The meeting, held primarily in Samoan, was held to review and analyze the midyear exams students took at the end of April. The Education Director handed out packets of statistics broken out school by school, subject by subject. The same exam for each subject was given to every year 9, 10, and 11 student in the school system, which means, theoretically, all of the year 9 scores can be compared to one another to make broad extrapolations. High scores tend to mean a school or specific teacher has done something right; poor score show areas that need improvement.

As one can expect, the teachers present at the meeting had quite a bit to say about this. Some noted discrepancies in the way curriculum is taught. Others noted that students with poor English skills often do poorly on tests in other subjects because the test is offered in English.

And then Vaifale stood up.

Vaifale teaches at my school and lives a couple doors down from me. He’s an older gentleman and a really nice guy. He starts out with the usual, “Fa’afetai mo le avenoa...”, Thank you for the opportunity, and then launches into his perspective on the whole comparing grades thing.

All of his comments are made in Samoan, and they essentially amount to the following: Each school uses its own marker to judge student success, and since we’re all using different markers, it doesn’t make sense to compare one school to another.

2 things I should note: First, while I did all of the translating above myself, for the life of me, I couldn’t tell you his exact words. As I said above, the less I think about the literal Samoan, the easier it is to translate the big picture. Second, Vaifale would switch to English whenever he used the term “marker”.

When he finishes, I come up with the translation above, and I’m a little baffled. But Phil turns to me and says, “That’s a good point.” Huh?!

As usual, I resign myself to the fact Phil’s Samoan is way better than mine, and I wait for him to explain. So Phil says, “Since we all have different people subjectively marking the exams at each school, it doesn’t make sense to compare from one school to another.”

It takes my brain a minute to retrace its steps. How had I understood nearly everything that Phil had said, and yet still been baffled? Where did I err?

And then I realized the word that had thrown me off: marker.

Here I was thinking Vaifale was talking about different markers, i.e. arbitrary levels or indicators, each school was using to grade tests. Maybe some schools set 50 as the marker for above average or below average, or something like that. I don’t know. Like I said, I was baffled.

But it turned out he was using the term “marker” to mean “someone who marks the answers right or wrong.” 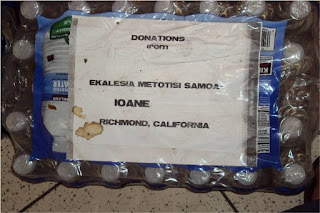 This water was on the floor next to the door in our meeting hall. The assumption is it was sent over in response to the tsunami. Cool because it's from Richmond. Strange because it's apparently from a Methodist, but it's being stored at the Congregationalist's. Also strange that it has yet to be used.

good shot of the water pack matt... its one of many "donations" that seem to wander off on their own and not been given to its intended owners. billz