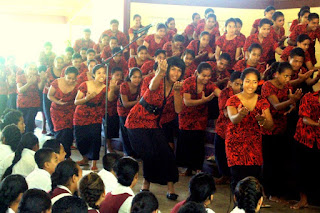 Did you know the French have their own version of “The Office”? The Germans too. America’s got its own, and of course there’s the original British version. Why so many versions of the same show? Because humor is local. Perhaps certain things are universally funny, but so much of humor depends on cultural nuance; you have to know things really well to keep a crowd happy. I didn’t consider this when I agreed to be the emcee for English Day today.

I’m no stand-up comedian, but I can tell a joke and I can punch up dry material. I think my greatest performance was when I was a Resident Advisor in college and I held my “First Floor Meeting”. The meeting was mandatory for all RAs across campus, and we used it to discuss building rules and housing policies and the disciplinary code and consequences and fire safety and blah blah blah. I figured I could a few wisecracks would keep the meeting moving. My entire spiel was extemporaneous, and thus I have no recollection of what I actually said. But I remember I had the room in stitches. I can be funny.

But Samoan humor is not one that comes naturally to me. My sense of humor is dry and subtle. My general perception of Samoan humor is it tends more toward over-the-top slapstick. And as much as I’ve lived here for 19 months and I’ve got a handle on the culture, I’m certainly not fluent enough to make references, cultural or otherwise.

Thanpuii asked me if I’d emcee during the morning assembly on Monday. I readily agreed, not having any specific notion of what the job would entail, but I figured I could wing it. But the more I thought about it, the more I had no idea what I’d do. Peace Corps make plenty of jokes about the parts of Samoa we find bizarre—the way guys in the village would borrow a guitar and arbitrarily twist and turn the tuning pegs, the way it’s often clear I’m standing in line but someone will cruise in right in front of me, the way older men roll up their shirts on hot days bearing their large bellies. But it’s difficult to know which things would translate and which would come across as me whining xenophobically.

I began to feel desperate, so I started telling anyone and everyone about my assignment. The guys at Rotaract, the bartender, students who’d texted me because they wanted to know their final grade. “You got an 86. Do you know any jokes?” I’d ask in the same breath. Just about everyone looked at me, thought for a moment, and then shrugged.

So this morning I was standing backstage listening to the faifeau lead the opening prayer, and I still had no idea what I would say. I had made peace with cutting my losses and not even trying to be funny. But it was still expected that I say something.

The time came. I sauntered up to the podium. I began by welcoming the faifeau, the judges, various dignitaries, parents, students, staff. I took my time; one might argue I was stalling.

I talked about how the only reason I was up there on stage was because I speak English, but that my Samoan is pretty terrible. I talked about how the first thing I learned when I came to Samoa was the song “Savalivali”, which is a bilingual song in which each line is effectively the translation from English to Samoan or vice versa. I talked about how music helps us understand and remember. And it’s fun. And that was why English Day was full of singing and dancing and music.

Then I introduced the first act.

It wasn’t incredible or even slightly memorable, but it got the job done. Whatever. 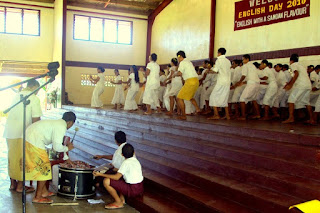 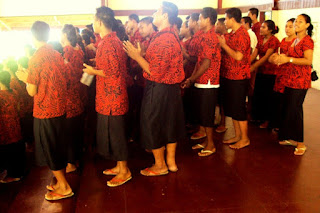 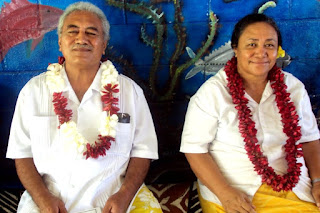 Have you watched the Laughing Samoans? They are a great laugh and probably support your slap-stick observation. Keep up the great blog!