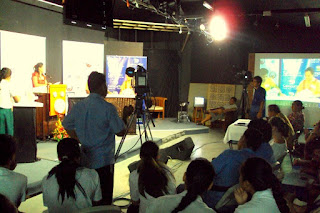 Who was the first Prime Minister of independent Samoa? What flag was lowered during the ceremony when Samoa gained its independ- ence? Who were the leaders of the Mau movement? What is meant by the phrase “The Pacific Way”? Poor Dustin hasn’t left Apia since he arrived Wednesday morning, but he got a long Samoan history lesson sitting in the studio audience of the Independence Day Inter-School Quiz this morning.

Apia Rotaract was asked to coordinate the televised contest a few weeks ago, and those efforts culminated in today’s taping at the TV3 studio. I admit I’ve been on the sidelines for most of this work, though I made a few phone calls to ensure contestants would have buzzers. I wasn’t even sure I’d show up for the taping until last night when I ran into one of the main coordinators. So at 8:00 this morning Dustin and I drowsily walked across town to the TV studio to help with taping.

We found a place to sit at the back of the studio and tried to stay out of the way while other people worked their specific assignments. We finally got work when Savave showed up with banners that needed to be screwed into the wall. This worked well because Dustin’s tallness was useful and my novice power drill skills were just enough to get the job done. I’m not handy by any means, but I do get a thrill out of using power tools.

I’ve only been to the TV3 studio once before for the Spelling Bee a few weeks ago. That was literally a taping, the footage of which was edited and played on TV later that evening. Today’s event was broadcast live, which I didn’t realize until we were on air. This was good because we were drilling holes in the wall 5 minutes before taping, and things would have been a lot more stressful had we known how urgently we needed to finish.

For the most part, things went incredibly smooth. Rotaractor Mandria played host, and the students from 7 Apia schools showed off their knowledge well. They did very well although some of their answers were a little odd. When asked about the first missionaries in Samoa, one girl used the words “polygamy” and “cannibalism” in her answer, I’m unclear why. There were a barrel of laughs from the control room when one boy was asked to identify a notable Samoan business leader who recently died and he said, “Viliamu Ah Liki,” which I think would be the American equivalent of guessing, “Joe Costco”.

Dustin and I were both impressed with the students’ use of Samoan and English. Each question was asked in both languages, and contestants were allowed to answer with either. Often they’d employ both languages to answer a question—sometimes switching back and forth in the same sentence. I think some concepts must be easier to explain in Samoan, and others must be easier in English—even to non-native English speakers.

The whole event was a good time, and Dustin seemed pretty impressed. For me, I love being involved in TV. I really need to figure out how I can get into TV when I get back to The States. 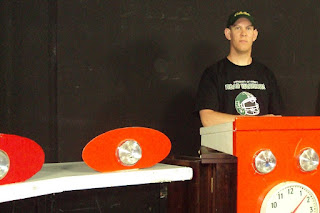 Dustin behind the host's podium at last night's setup. 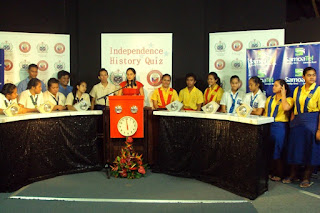 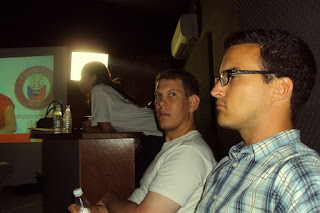 Me and Dustin at the back of the studio. 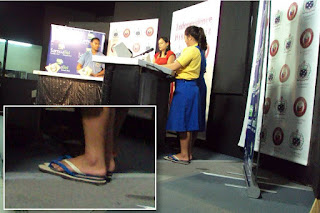 I noticed this girl was wearing 2 pairs of sandals: hers and her partners. This was so they would be closer in height for the camera. I think? 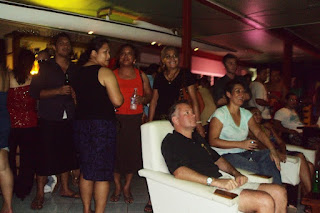 The crowd watching the London rugby tournament on TV at the bar last night.

It looks the like the Logan AV Nerds are back and have gone international, so everything is under control. Good photos.

Oh wow I know about 4 people in that bar watching the 7s.