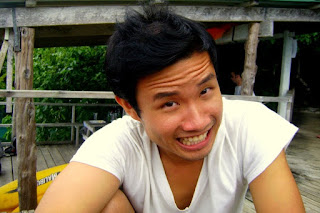 This weekend marked my first visit to Supy’s house. We moved into our houses 16.5 months ago, and there are still a handful of group 81 houses I have yet to visit. But Supy’s finally been checked off that list. The one time I visited Supy’s village before this weekend was when my mom and dad visited a year ago, and we went to swim in Supy’s village’s waterfall—while Supy was in Fiji. But now I’ve finally seen the kid in his natural habitat.

First a few words on Supy: everyone loves him. He’s laid back and incredibly social and ridiculously nice. And because of this, it takes twice as long for him to get anywhere because he has to stop and chat with everyone he runs into along the way. This can grow tedious if he’s in your travelling party, but on the whole, Supy is great. But it’s important you understand Supy is everyone’s friend. In fact, even if you’ve never met the kid, rest assured you’re his friend too.

On its own, the Peace Corps lifestyle is based on forging relationships with the people in your village, and most volunteers become village celebrities the day they move in. But Supy is so perfect for this role, he brings things to a new level.

When I first got off the bus and approached the school gate, a man came out of the neighboring house to inquire about who I was and what I was doing there. Supy came out promptly, resolved the situation, made a couple dirty jokes, asked about the car the guy was working on, gave a summary of our plan for the evening, made more jokes, asked about the guy’s wife and kids, briefly remarked on the recent issues he’s had with his plumbing, observed a passing pig, threw in a couple more jokes, and then finally wished the man a pleasant evening. It probably lasted 10 minutes, and I was exhausted by the end. I should add that Supys sees this guy all the time. This wasn’t a conversation after a long absence or “catching up”; this was a routine, everyday. Personally I tend toward briefer, more reserved interactions, but Supy chats.

The effect is he comes across as having all the time in the world to chat with whomever, and he is thus beloved by everyone. And this is not limited to his village. Walking with him around Salelologa, the main city on Savai’i, I felt like part of a celebrity entourage. Pedestrians waved, people shouted from cars, all the shopkeepers know his name. After a bunch of random kids walked by and waved and called his name while a bunch of us sat a ways back from the road drinking niu, K8 observed, “Supy’s pretty much the Blakey of Savai’i.” Well put. 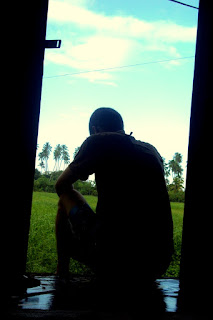 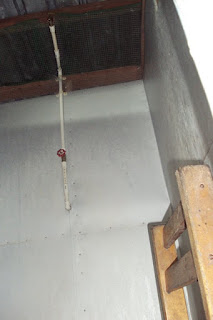 Supy's shower. The spigot is high enough Supy has to stand on the chair to turn on the water. 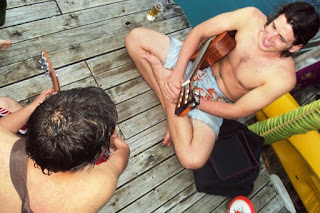 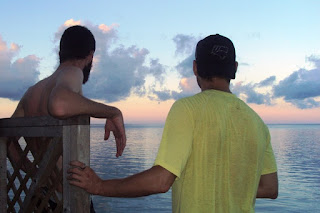 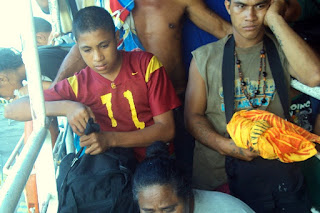 Trojan getting off the boat Friday afternoon.

It's so true! Who doesn't love that kid? Ha, great post!

Great post, ..Love that Supy and havent even met him...yet.

I second Mr. Tax.
Supy must have Samoan blood, love this blog, laughed reading thru it!!!

Supy rocks!
I hope to get a photo with him before you all leave... to add to the collection :)