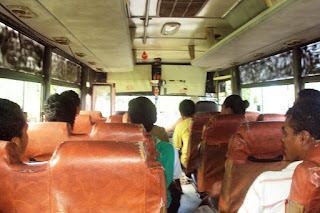 “I hate it,” said Harris. “It’s genius.” Harris was this guy I met near the end of my junior year of college. He was a film student, and he was talking about a scene in the movie “Almost Famous” in which the characters are all on a tour bus, and they’re all angry at one another, and then they slowly and spontaneously start singing Elton John’s “Tiny Dancer.” I think Harris was simultaneously jealous of Cameron Crowe’s brilliance and annoyed at the simplicity and contrivance. Oh well, Harris.

Spontaneous singing is a special thing in America; not something we experience on a regular basis. I remember my family once started singing “American Pie” during a game of Catch Phrase. There was also one night at the CNET sales conference in 2006 when our party bus of inebriated salespeople broke out into Journey’s “Don’t Stop Believing”. Beyond that, I have a hard time recalling any other big musical moments.

I wouldn’t say it’s common in Samoa, but I would say it’s more common. People sing a lot here, and it seems like everyone knows all the words. Our staff party in December was essentially a 2-hour sing-along at a public restaurant in Apia. It was pretty great. But it didn’t seem quite as spontaneous as what just happened on the bus.

I stayed at Supy’s house last night, and he, Jordan, and I took the bus into Salelologa to go to the bank and the Peace Corps office and such. The ride wasn’t too long, maybe 20 or 30 minutes.

I took a seat next to Jordan, Supy sat across the aisle from us.

Last night I whined a lot about the buses that run from the wharf back to Apia, and how I’m not excited about taking that bus tomorrow. So when we got on the bus this afternoon, Jordan asked if there were other things I didn’t like about the bus.

On the contrary, I very much enjoy riding the bus. I like public transportation in general. My first time in New York City, my friend Dustin and I packed our trip wall-to-wall with tourist stuff, but my favorite part was the subway. I like moving, I like going places. I like the idea of a bunch of strangers coming together to share the same space.

And it was impeccable because the moment I finished explaining all this to Jordan, we could hear it coming from the back.

At first it was just 2 or 3 guys in the very back row of the bus, all singing—not at the top of their lungs, but not quietly either. It seemed to move like a wave up toward the front, row by row. After 20 seconds, the entire bus might as well have been a choir.

Forgive me, I didn’t recognize the song. But for a moment, the bus was very into it.

And just as quickly as it started, the song and the moment were over.

I looked at Jordan. “Yeah. The bus is cool.” 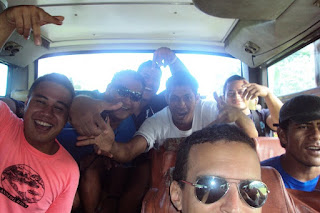 The choir. Me halfway in the frame in my aviators.

You forgot about us and the Nemeceks breaking into "The Age of Aquarius" from Hair! That is memorable for me.

You know if things were really like what appears in musicals, where folks break into song at the drop of a hat during normal conversation, we might find that a little tiresome. But you're right, we could use a little more spontaneous singing in this country.
The Mennonites got it down though, ever been to a Mennonite hymn sing? 4 part harmony like they were assigned their parts at birth, acapella. Gorgeous.