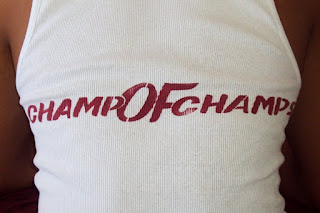 “This is the first Champ of Champs in a really long time,” the Indian Missionaries told me this morning while we waited under the mango tree for Apong to pick us up. None of us was assigned responsibilities for today’s event, so there was no rush to get over there. In fact, I didn’t know what time I was expected to show up (or if I was expected to show up). But I heard Maengi locking her door around 8:15 a.m., and I shouted to ask her if I could catch a ride.

The Champ of Champs, so-called because it is the championship track meet for the top scorers in the regional “zone” meets, was canceled last year on account of Swine Flu, the year before because of student fighting got out of hand at regionals. So going into today, I was a little excited to see a part of Samoa I haven’t seen before.

Then again, you see one athletics meet, you’ve seen them all.

The athletes have a tendency to become extremely faint after crossing the finish line, there’s no shade, and the scene in the grandstand is at least as enthralling as the actual track and field events, if not more so.

Not having responsibilities was good and bad. Since I wasn’t an official at the record-keeping table like I have been the last 3 athletics meets this year, I could wander the stadium freely watching starts and finishes up close, cheering for students from just outside the track’s fence, hanging around with other Peace Corps Volunteers whose schools showed up for the event. On the other hand, having a job gives the day focus—something to occupy my time. No offense to the athletes, but a 6-hour track and field meet can get a little tedious.

Also, I did have responsibilities. I was supposed to take pictures for the school magazine. This ended up being pretty easy because when most people see a palagi with a camera at an event like that, it’s just assumed there’s an official purpose.

While the day flowed much like any other athletics meet, the general feeling was tenser. At USC, football games were mostly a jolly, easygoing affair—except for the higher profile games. Any time we played Notre Dame, things became cold and uptight, like there were grander issues at stake. This was the feeling at Champ of Champs. There was still cheering and laughs, but at the core of things, particularly where the athletes sat waiting for their events, people were on edge.

At one point I went to high-five Linda, a year 12 student who goofed off in my class last year, but is very sweet and an extremely fast runner. But after we high-five, she says, “Sorry.” Confused, I asked what she was sorry for. “I run too slow.”

I wanted to shake her and say, “You qualified for 5 different events in the national championships. I’m not worried about your speed.” But instead I shrugged and pulled out my camera. She smiled in the picture. 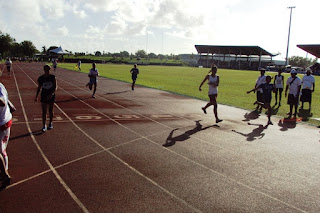 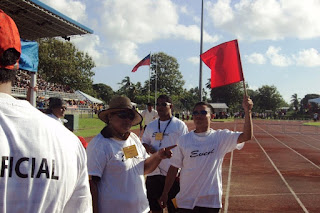 Supy was a finish-line judge. 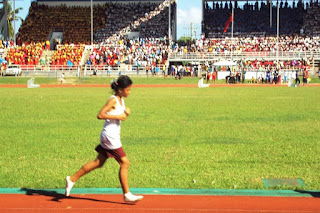 Year 9 Nakisa runs the 1500-metre race. I really wanted to get the photo so she is in focus and the background is blurry, but my Sony CyberShot would have none of that. 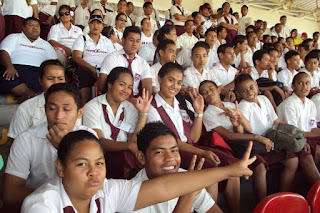 Student spectators from my school. 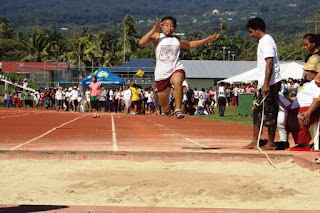 Year 13 Maryhellen long-jumping. I'm a little proud of this photo. An homage to Mr. Mac. 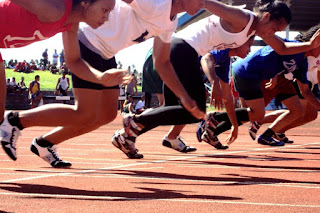 Year 13 Lanuola (white top, black pants) starts the 100-metre dash. I'm a little proud of this one too. 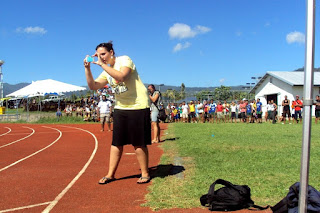 You can tell in this picture how the police moved the spectators far back from the track. Yet somehow Blakey and I were allowed to stay. 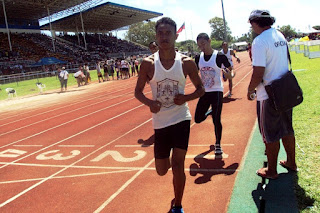 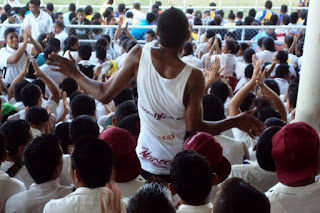