We Did Start the Fire 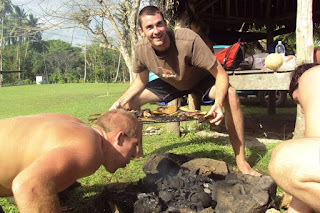 Everybody’s got an opinion. During training we played that game where you sit in a circle and draw a picture and then pass your picture to the left. Then you take the picture that’s been placed in front of you and augment the drawing somehow. Then pass again, augment. Pass, augment, pass, augment, pass, augment, until finally you get your original drawing back and it’s warped and bizarre, but somehow it’s the product of the collective. That’s how today’s fire worked.

A bunch of us headed out to Tafatafa on the south side of Upolu to hang out on the beach and barbecue. And right from the start, the barbecue’s outlook was bleak. For starters, we didn’t have a barbecue. We had 18 pounds of chicken; onions, soy sauce, and garlic to marinade; and a plastic bag with not enough charcoal. And no barbecue. Brilliant.

Blakey got things started by asking the family at the next fale over if we could borrow the large rocks and corrugated aluminum they’d used to cook their food. Erin was able to finagle a grill from the owners of the beach fales. Dan then went into bush and came out with an armload of firewood. Paul collected a bunch of dried palm fronds to use as kindling, and Phil and I went in search of small volcanic rocks, which function like reusable charcoal. If I’ve given you the impression this was a neat and orderly process in which we huddled, set out a plan, and yelled, “Go team!”, I’ve painted the wrong picture. This process of gathering materials was deeply unorganized with begrudging participants and probably took about 2.5 hours.

Paul stepped up to build the fire first. My stint in the Boy Scouts is best measured in weeks, so I’m no fire-building expert. That said, I recognize that everybody seems to have their own style of doing things. Paul comes from the Start Small and Build Slowly school of thought. Dan comes from the Throw Everything On So We Can Start Cooking school of thought (His style makes me think of that line from Dances with Wolves where the one Sioux looks at the others and says, “Only a white man would light a fire big enough for everyone to see.”). In any case, there were conflicting philosophies about how best to cultivate the fire.

I found it best to simply try an assist whichever firemaker was up to bat. I helped Paul build a small structure from firewood. I helped Dan build a larger one. I helped Phil fan the kindling. Then I helped Paul stuff the lava rocks between the burning logs.

Say what you will about too many cooks ruining the soup, but in the end we succeeded. Out of nothing we came up with 18 pounds of grilled chicken. 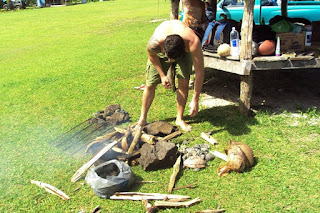 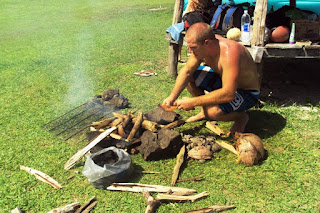 Labels: Group 81, Out and About