Rolling Out the Red Carpet 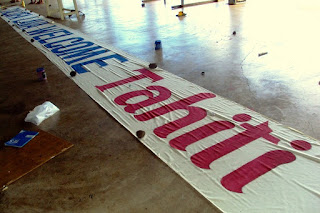 I slept through most of first period, as I am wont to do most Wednesdays. I don’t have a first period class on Wednesday, and since I literally live a stone’s throw from school, I can afford to wake up 20 minutes before second period and still get to work on time. When I opened my eyes, the cat’s eyes looked directly back at mine from not more than 4 inches away. The cat, as she is wont to do, wakes up most mornings around 6 a.m. and waits (im)patiently for me to feed her. But this particular morning, something was different: there was noise.

On Mondays, I listen for singing. When I wake up to the sound of one cohesive song, it means all of the students are gathered in the assembly hall, and I can take an extra snooze on account of first period starting a half-hour late. Most other mornings I awake to the quiet murmur of students in the schoolyard awaiting the first bell.

But today, there was more than a murmur. It was more than a stir. The sound was that of students jovially enjoying the morning, excited about a long day free of school. And that’s exactly what they were in store for.

Term 2 is finished. Tahiti’s Oceania Games Rugby Team arrives this Saturday at 4:00 a.m., and the rest of this week is officially devoted to rolling out the red carpet. Walking across campus this morning, I saw students bleaching walls and floors, sweeping, mopping, painting, carting desks, weeding, burning trash, raking grass clippings, et cetera. The art students were hard at work, half of them finishing assembly hall murals, while the rest worked on a welcome banner for the Tahiti team.

Over the last year and a half, I’ve seen my school put in a pretty good effort on so-called cleaning days, but nothing has compared to today. Later in the morning locksmiths came in to replace the doorknobs on several of the classroom doors—including the computer lab. As you may recall, the computer lab has been without a working doorknob ever since my year 13s and I were trapped inside last year. I’ve been lobbying for a new doorknob ever since to no avail, but one lousy rugby team comes out of the woodwork, and I get a new doorknob, no questions asked.

With all of this shipshape intensity, I find it difficult to find a good place to apply myself, so I’ve decided to work on my own small projects. There’s been a small backlog of student IDs I’ve been meaning to print, so I used some time this morning to get those in order. I was also able to print sample photos of each form class, which I passed out to teachers so they can give me a detailed list of which student is in which row.

On the whole, it was a rather productive day. And no more teaching for three and a half weeks. Sweet. 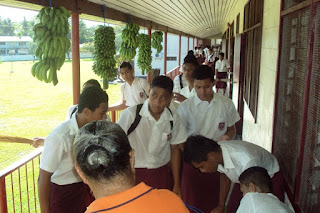 Bananas hang outside the classrooms that will host the team. 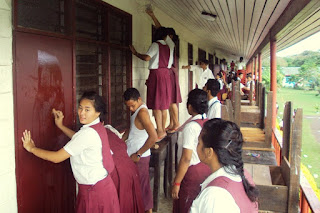 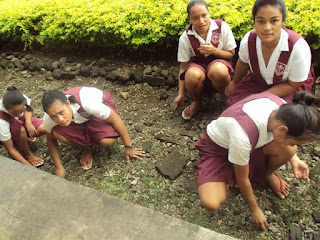 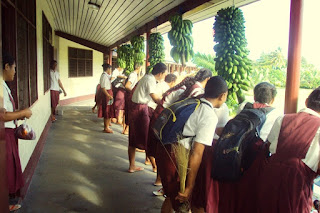 Students taking a break from cleaning and banana-hanging to lean over the 2nd-floor balcony. 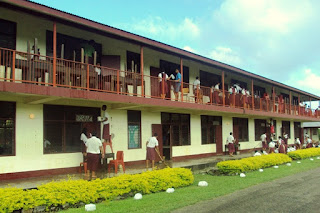 The year 12/year 11 building with students all over the place.