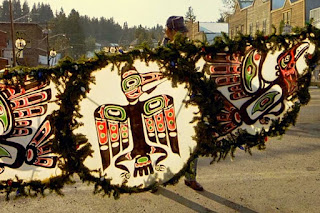 I left my house twice today. I couldn’t find the motivation to put on a shirt before I took out the garbage this morning, which resulted in a tongue-in-cheek “Seki ā lou tino,” sweet body, from one of the boys who lives on campus. Then later on this evening after my propane stove ran out of propane, I walked up the mountain to purchase a chicken salad wrap from one of the nearby pizza places. Yes, when it rains on a Sunday, it’s hard to find any reason to go anywhere. I made some phone calls and talked to people back home, and that was nice. But I think the highlight of my day was Northern Exposure, season 3 episode 10: an episode entitled “Seoul Mates”.

From the DVD’s description of the episode:


Cicely townsfolk await the pageant of the raven, the town’s annual Christmas rite, and this means a first ever Christmas tree for Joel, unexpected time alone for Maggie, a nostalgia for past holidays for Shelly, and a new family for Maurice.

This particular episode won an Emmy for outstanding writing in a drama series, so it’s got qualified brilliance, but I think it hit me on more of a gut level this afternoon.

I miss American Christmas. Don’t get me wrong: experiencing Christmas here in Samoa has been educational, and I’ve had some enjoyable times, but it’s hard for it to feel festive amid the tropical heat.

I also feel like my Christmas experiences here have either been either too heavy on the Jesus (e.g. laying it on thick at midnight mass) or too heavy on the secular (e.g. radio mixes mashing “Feliz Navidad” with the Black-Eyed Peas’ “My Humps”). Is there no middle ground?

Also, since Thanksgiving isn’t a thing here, and Halloween isn’t much either, there’s no official start to the Holiday Season. It’s like sometime around September, someone fishes out their copy of the Mariah Carey Christmas Album, and just thing like that, things have begun.

I won’t bore you with my reverence for Northern Exposure, but I will say that this afternoon’s episode captures all the best parts of the American holiday season: the cold, the pluralism, the music, the fun. But it also has that overarching Peace-Corps-like tone with the stranger-in-a-strange-land premise and the relative isolation. In short, it made me look forward to being back in America for Christmas this year.

I’m still queasy about my return home in a few months, and anyone who knows me knows I detest starting the Holiday season too early. But I guess I just felt a warm wash of anticipation this afternoon. The malls, the cold, the red cups at Starbucks, the Drifter’s version of “White Christmas”. It’s going to be a good time.

Yeah. So that was my Sunday.

I hope you’re well. Pictures below.
Posted by Matthew at 8:00 PM

I am so happy that you'll be home for Christmas!! It's been taxing finding baskets all by myself. I can't wait to pick you up at the airport, I'll have a red Starbucks cup in hand!

Matt - the pic at the top of the post include what group in uniforms?

I quite enjoy the blog and the pics. :) Malo Matt!