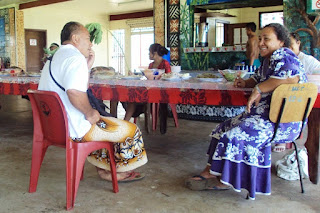 There’s a part in the “Numbers” episode of Radiolab where they talk about how counting by ones is a relatively new thing for humans. Originally, humans counted exponentially; i.e. I have one, I have a few, I have several, I have lots. There are still a few tribes in South America, I think, that don’t have words for any number greater than 5—once you have more than that, there’s no need to quantify. I think there are still some vestiges of this phenomenon in Samoa. Strictly for quantifying objects, there’s a lot to be said for tele, but I think this practice is even more prominent in the word toeitiiti.

Directly, toeitiiti translates to “almost” or “soon”, depending on the usage, and I suppose to a certain extent, both “almost” and “soon” have their own inherent relativism in English. If I say, “The taxi will be here soon,” the time involved is probably much shorter than when I say, “Experts predict a big earthquake will hit California sometime soon.” Geological events and yellow cabs work on different scales of time; thus the problem with “soon”.

But in Samoa, toeitiiti can mean significantly different quantities of time, or other units, on the same scale. For example, the first time I went to the river fales in Falese’ela, we walked to the local fale’oloa to wait for a bus home. When we asked the owner when the next bus was coming, he smiled and shrugged. “Toeitiiti,” he said.

There was some knowing humor in that smile: it’s possible he meant the bus would arrive in 5 minutes. Or 2 hours. Both would fall under the toeitiiti threshhold.

In fact, I’d posit it’s difficult to pinpoint the limits of toeitiiti, somewhat similar to soon, I guess. If the bus is coming in 3 hours, is that not soon? What about 4? 5?

I bring this up because it was mildly entertaining to see toeitiiti frustrate the hell out of my Samoan staff today. Twice.

The first was around noon when we had finished preparing lunch for the Tahitians, but the team was out at an HIV/AIDS rally. We were in constant contact with one of the team’s Samoan chaperones, who had informed us of the team’s expected time of arrival: toeitiiti. Suasami had me peel the Saran Wrap off the deep-fried fish at 12:05 p.m., after which I was to fan the dish with a breadfruit branch.

A half hour later, I was still waving that breadfruit leaf back and forth. The team was nowhere in sight.

Then later this evening, there was some worry over the dearth of rice that had been cooked. I was overseeing the rice cookers, which Cascade and Panasonic have both designed to be timer-less. So once again, Suasami was checking in with me every other minute to see how much longer the next batch of rice would be. But with no quantifiable time, I could only shrug and answer, “Toeitiiti.” 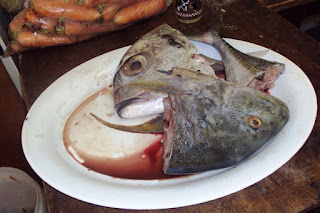 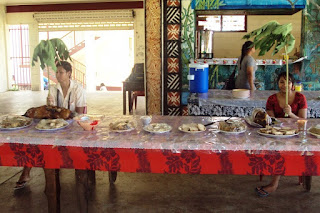 Chrispune and Eletise fanned food for ~40 minutes while we waited for the team to show.