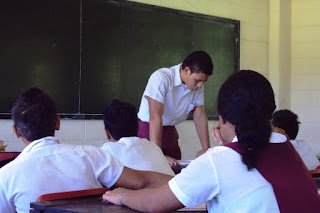 I admit I try to be liked. I’ve still got emotional scars from my own years in middle school, and consequently, I try and carry myself in a manner that will make students and staff like me. This actually works well in the Peace Corps because from a public diplomacy standpoint, they also want me to be liked. I’m not saying I’m a foul, despicable ass in sheep’s clothing; I’m just saying I consciously try to put the best foot forward. And sometimes diplomat Matt and teaching Matt run into conflicts.

Believe it or not, teaching isn’t all glamour and cocktails. No one likes to punish behavioral problems or assign bad grades or mark up an essay in red pen. It’s not polite.

So I try and focus on the upside of teaching: watching my year 13s excel at Excel, telling goofy jokes to my year 9s, walking to school every morning through a barrage of shouts of “Morning, Mister!” And I downplay punishment and bad grades and criticism as much as I can.

So it goes with my year 10s. I teach 10.4 English, i.e. the kids at the bottom. With a textbook that calls for analyzing themes in short stories, conducting research using the Dewey decimal system, and making impromptu speeches, my kids raise their hands to ask questions like “How do you spell ‘bowl’?” They’ve got some catching up to do.

And while I believe these kids are getting the short end of the stick and someone needs to light a fire under them, I’m not into hard love. I don’t dumb down the work or lower expectations, but I show sympathy and discretion when I can.

So back to where I left off yesterday. I have this brilliant idea we’re going to read our journals aloud. The kids can practice speaking publicly, and social pressure will force everyone to write their entire journal lest they be publicly shamed.

When I introduced the idea, the class was caught off-guard, which I liked. There were a few itching for the spotlight though, and they set the bar. They were the brave kid pushing off the wall—exactly what I needed. And just like in the pool, others followed. It worked for a little while. But then the class got bored, and I had to shush them several times.

The sound of my shushing invited the 10.4 form teacher out of her office. I should explain. Every classroom at my school has a small adjoining office that belongs to the form room (home room) teacher. Teachers often hole up in their offices when they have prep periods.

Now, the trick with the “No Instructions” style is you have to be congratulatory. No one wants to push off the wall and swim if they’re going to get badgered for poor technique. In my English class, this meant we’d applaud when someone went up, and we’d applaud when they sat down, and I very rarely corrected anyone’s English. Mechanics were not the point of the exercise.

But the form teacher comes out and starts nit-picking. “My father was come to the plantation,” said one kid.

“Your father WAS COME?” she yelled.

The kids in class were shocked. The kid at the front of the room was surprised and embarrassed. It was awkward.

But only for a moment because I realized as much as everyone was stunned by this turn of events, they are all quietly entertained. Even the kid at the front of the room, in the midst of his shame, started laughing.

It was 5 minutes before the end of the period by then, so I just let things run their course until the bell rang. I didn’t know what else to do; educational, cultural, diplomatic, and grammatical issues were everywhere. 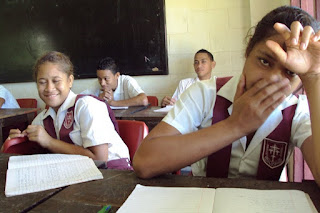 10.4 girls shying from the camera. 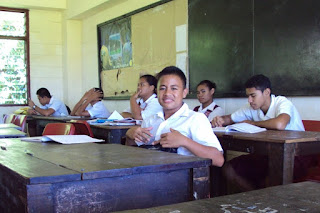 The kid in the center is Akari. In "T" language, his name is Atari. Awesome.

hi.. just dropping by here... have a nice day! http://kantahanan.blogspot.com/

Why isn't 'bowl' spelled 'bole'? And why isn't 'bowl' pronounced like cowl, fowl, howl, jowl,... and what about bowel, dowel, towel, vowel? English is a tough language to learn in a classroom, as there are too many exceptions. (too, to, two, buy, bye, by)

English, like all european languages, are a product of their history.

The spelling and pronounciation differences between different words in the English language are a result of all this history.

The same with German. The German spoken at the time of colonisation in Samoa is not really the German they speak now in modern-day Germany.