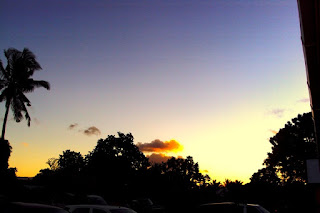 This week saw the dawn of August. Phil pointed out tonight that our Close-of-Service Conference will most likely start before the end of this month. Also, the application window for one of the law schools where I’m applying opened August 1. If the beginning of the end hadn’t started before, it’s here now. At dinner Saturday night, a few volunteers knew exactly how many days they had left. I’m sticking with blissfully unaware for the time being. Here are some other odds and ends from the week:
That’s all I got for this week. I hope you’re well. Pictures below. 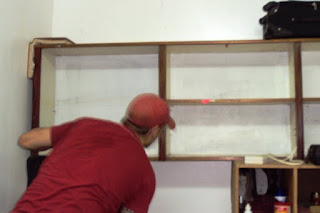 Peace Corps engineering. There's been some shuffling of furniture in the Peace Corps office, part of which involved putting up this shelf, which was unstable because of a <1" gap between the shelf and the wall. The solution: hammering a biology textbook from 1986 into the gap. True, the structural integrity is dubious at best, but as an architectural statement, I think it communicates the Peace Corps lifestyle accurately. 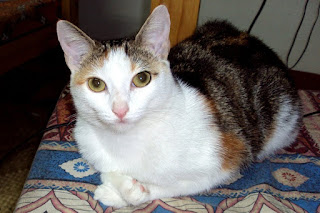 On occasion, Scout sits were paws crossed like this. It's dainty. 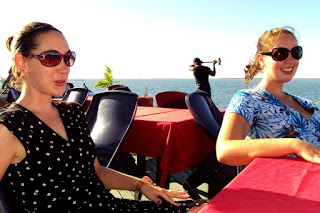 Check out this outtake photo from Tuesday afternoon of Rachel and Blakey... and a man in the background who appears to be working on a railroad.

The hole left in your life when you stop your daily Samoa blog upon end of service will probably be just a little bit bigger for you than it is for all of us that read it daily. We will all be bereft, unless, of course, you keep on blogging about the trevails of Law school after life in the Peace Corp.

I can't put heroin on a pancake and call it a new drug! Its heroin! haha! best part of the podcast...

Oh please blog about law school! Anyway, I've been away for way too long. Scout had grown!