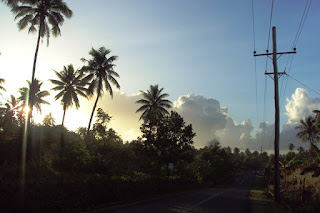 “It will be so much nicer after Daylight Savings and we’re only 6 hours off the east coast,” Chris said to no one in particular while sitting in the Peace Corps office resource room recently. Since our group arrived nearly 2 years ago, Samoa has wavered between being 6 and 7 hours off Eastern Time, depending on whether the east coast is in Daylight or Standard time, and thus 3 or 4 hours off my old haunts in California on Pacific time. But this year, there’s a twist.

“Samoa’s observing Daylight Savings this year,” I told her. “So it’s probably not going to be the same 7-hour/6-hour shift.”

Chris was none too excited to hear this, which wasn’t surprising. I certainly have less people with whom I communicate regularly living on the east coast, but I can imagine how a 6-hour time difference could far more convenient than a 7-hour one; goodness knows I have enough trouble with 3 hours and 4 hours.

But then I thought of something. “I wonder if we’re springing forward or falling backward.” Samoa’s in the southern hemisphere so seasons are backwards from those in America. School lets out of the summer in late November/early December, Christmas is spent at the beach, and September 21 (or 22) will be our spring equinox.

One quick Google search confirmed my suspicions: we are indeed springing forward. On Sunday, September 26, Samoa will move its clocks forward an hour. This has bizarre implications when one considers America, what with its northern-hemisphere-status, will move its clocks backwards on Sunday, October 31.

This means Samoa will be:
This last one is particularly strange since Samoa is considerably farther west than Hawai’i. So let’s put this into perspective. At 5:00 p.m. here in Samoa, it will be 7:00 p.m. on the west coast of the United States, 10:00 p.m. on the east coast, and still only 4:00 p.m. in Hawai’i. That’s weird. Incidentally, Luisa, who has been in Chile (and thus in the southern hemisphere as well) since late May, will still be 7 hours off Samoa because she’s be springing forward too. What is my point with all this? I’m not sure I have one beyond that:
But, if nothing else, Chris will be happy.