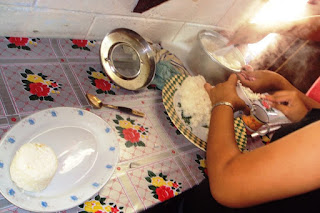 They asked me about pasta. I was minding my own business, making rice moldings from some sugar holder someone thought was the right size for a serving of rice. When one of the girls was called away, I took over at molding rice, and I discovered I had natural talent at forming neat mounds of rice, syran-wrapping the completed tray, and sending the product out to the buffet table. But then, as I said, they asked me about pasta.

I briefly appeared at the snack bar window looking for my towel-turned-pot-holder when Maengi called me out.

“Matt!” She said loudly, so the small group of staff sitting with her turned to look at me. “How do you make pasta?” I’m pretty sure the emphasis there was implied by my own mind. Boiling and straining pasta is such a simple process, I could only assume she was asking for some American cultural nuance or some palagi cooking wisdom.

My response was to the point, and somewhat ridiculous. “On my stove.” I honestly meant nothing rude or snarky with this answer. I think I had rice on the mind. Cooking rice is a delicate art with many different styles. On a basic level, I cook rice on the stove rather than the rice-cooker. My impression is my staff are all of the rice-cooker persuasion, and cooking starch on the stovetop is a mystery.

The only pasta I’ve seen Samoans cook is canned spaghetti, which is used as sandwich filling. Spaghetti sandwiches were big in the host village, and they’re served in the staff room during Interval fairly often. So when the Tahitians asked for a pasta meal before their game tomorrow, some teachers began to worry.

Once it came out I know how to cook pasta, the questions were rapid fire: “At what point do you add cornflour?” “Can we just stir some tuna in?” “Maybe we should just throw some flour on top?” “How about green beans? I think we could make some green beans and stir them in with the spaghetti.”

I realize cooking pasta is also an art; getting the al dente just right takes some skill. PCV Dan, who asserted his pasta authority early in our Peace Corps experience, claims the best way to tell if spaghetti is ready is by throwing it at the wall. “If it sticks, you’re good to go,” he says.

I didn’t offer my staff any clever tricks. I told them to keep it simple. Throw some spaghetti sauce on top, and put the chicken or green beans next to it.

They were still curious as to why they shouldn’t add corn flour. Oh well. 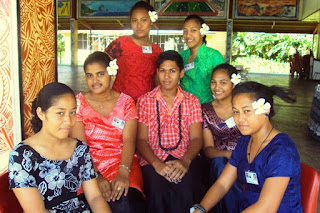 corn flour.....? I'm baffled, but really interested about why it came up. Can you find out? Maybe they were thinking about making pasta from scratch? Perhaps torilla soup?