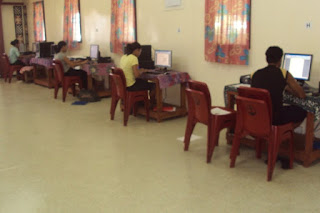 Marie, with a slight look of panic and confusion in her eye, took out her pen with purpose and drew a pair of small circles. And then she looked at me helplessly. Her manner was so profound it made the little symbol she drew all the more menacing. The moment was straight out of a crappy Dan Brown thriller: I was baffled by what she’d drawn, and she was driven by urgency and deadline. The symbol sat there staring back at the two of us like two looming eyes.

Half of my year 13 class from last year (i.e. 3 students total) showed up this morning for help with their university computer homework. Sinaumea and Tui’s assignment is the same Microsoft Word project I’ve helped a bunch of other students complete in the past, but Marie is planning on majoring in computer studies, so her work tends to be more involved. She was working on creating her own relational database in Microsoft Access, something about which I know very little.

Access is a clumsy program, too simple for professionals, too involved for casual users. In my opinion, there are very few database issues that either:
In fact, even after teaching it for 2 years, Access is still a big mystery.

But Marie and I were elbows-deep in it this morning when she drew the peculiar pictogram. My first instinct was to scour Access’s various toolbars looking for an 8. Or a colon. Or some sort of digital Rosetta Stone. It’s amazing how quickly and easily computer icons can go from useful tools to nonsensical Egyptian hieroglyphs.

When I worked at eCivis, the company built new proprietary software, and there was a small contest to design icons for the graphic user interface. I remember readying my entry, and to a point I can sympathize with whoever designed those for Access.

Perhaps the problem was we were working in Office 2003. Now that Office 2007 has done away with drop-down menus, I assume the Access interface is more self-explanatory.

Now that I think about 2007’s laconic interface, there is something primal about the little pictures; as though humans have gone from drawing buffalo hunts on cave walls to a small tipped paint can icon in the “Paragraph” section of Microsoft Word. Such evolution.

Anyway, as you’ve probably guessed by now, Marie had drawn the symbol for “infinity”. Errr... ∞ . There was a big Robert Langdon moment when I rotated the paper 90° and the 8 she’d drawn was transformed.

It still took a while to figure out how to change a “one-to-one” relationship to “one-to-many”, but lo and behold, when we finally got it, the ∞ showed up, all bold and shiny.

Now we’re ready to take on the search for the Holy Grail. 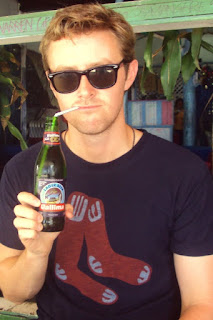 Dylan 77 has been back in Samoa the last couple weeks. Today at Italiano Pizza, he drank his Vailima through a straw.

Matt, I am sitting in a class for advanced skills for new features in Excel 2007 and it looks like Excel now includes all the functions the PSSC wants the students to learn in Access (validation rules, advanced filtering, etc). As far as I can tell it is only missing writing SQL queries, but the advanced filters let you create the equivalent of a query. Pretty cool. If they upgrade to Office 2007 they can eliminate the section on Access entirely if they wanted and leave the database stuff to real databases and courses at university.

Does this make me a nerd?