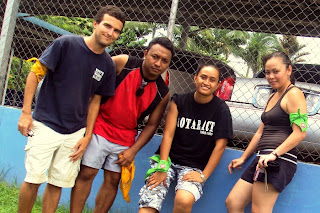 Sometime around April 1998, I attended Nik’s photo scavenger hunt birthday party. Teams were given a list of around 18 inane scenarios (group member inside a dryer at the Laundromat, entire group wearing Burger King crowns while sitting inside a McDonalds, etc.), 10 of which had to be photographed with the team’s Polaroid camera. I had so much fun, I decided I needed to replicate the event for my own birthday party. Which I did, 3 times over. I still have all the Polaroids from those parties, and one day I’d like to get them all scanned and uploaded. In any case, I participated in Rotoract Apia’s Amazing Race Challenge event today, which was very similar to the photo scavenger hunts of old.

The race was more like the TV show in the sense that teams had to complete challenges in order to receive points, and once a challenge was completed instructions from the next challenge were given.

The day started with a obstacle course. Teams of 4 had to finish 5 hotdogs (bun and all), assemble and fly 2 kites, collect pieces of a puzzle, and then assemble said puzzle. Blakey’s team, Team Pink, came in first. My team, Where in The world is Fiona? (Team WTF), came in second. Whatever. Team Pink got a 2 minute head start, and they got stuck in traffic.

The challenges were pretty good because the coordinators were able to get shopkeepers and businesses to participate. The first challenge was to dress a model in the storefront at a local Apia retailer. When we finished the woman behind the counter handed us an envelope pointing us to the Apia Sports Complex where we had to play a bunch of youth soccer kids (who were very very good).

From there we had to go to figure out a particular book’s ISBN number and then pick up a copy at the local bookstore, push a balloon across the pool at the Aquatic Center, eat a quiet lunch at a participating restaurant, compete against another team at blanket volleyball at a gym, and then take photos at specific landmarks around town.

Interspersed through all this were bonus pictures (group with former Miss Samoa, group climbing a tree, group with a police officer, etc.) and a couple bonus challenges. At one point we trekked up the mountain to a preschool in Vailima where we sang “Hush Little Baby” to a bunch of 4-year-olds.

All in all, the event was well organized and really fun. I didn’t really know anyone on my team before today, so it was a bonding experience. Our driver, Phaedra, brought her daughter 3-year-old daughter Olivia along, who I ended up sitting next to for the day. The backseat was pretty crowded with Olivia in her car seat, me in the middle, and the other guy on our team, Situfu, squeezed in on my right. We all worked well together though, and our team finished the race first, earning us 100 bonus points.

Results have yet to be announced, but I think we have a fighting chance. And if nothing else, it was a fun way to spend a Saturday. Blakey and I talked about how it would be fun to organize it for the Peace Corps volunteers, but it would be difficult to pull off since none of us can drive.

Blakey suggested we do it on bikes. And I agreed. We could all meet at the clubhouse afterward. 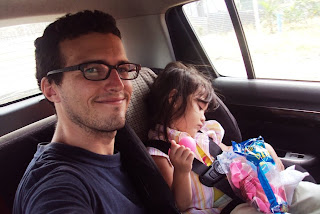 Me and Livia. She wanted nothing to do with me the entire day, but she did wave goodbye to me when I left. 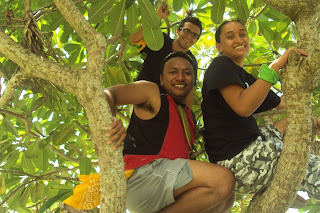 "At least 3 members of group climbing a tree." This looks like the cover of our World Music album. 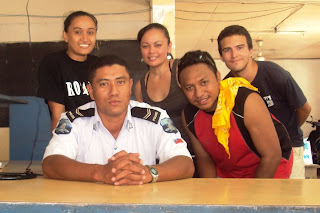 "Group with policeman or policewoman or half a police..." I think I had a similar item back in my photo scavenger hunt days. 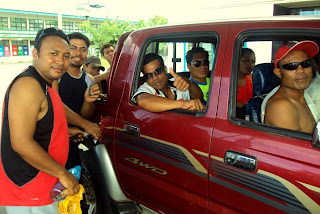 "Group member pumping someone else's gas." I definitely had this on one of my lists back in the day.

Labels: Apia, Out and About, Weekend

Wow small world, I remember Fiona and Phaedra from my day at St. Marys. Such a long time and they STILL look the same.