The Bus to Salelologa 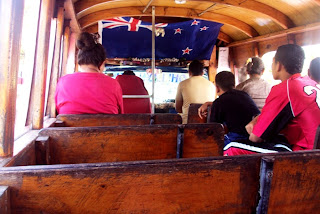 Phil, AJ, and I woke up groggy this morning. AJ played games on his cell phone, I read a book, and Phil slept late. We took turns taking showers, and enjoyed a breakfast of “Magic Shapes,” a generic version of “Lucky Charms.” None of us felt any sense of urgency about doing much of anything, but eventually it was decided we should head into Salelologa, the largest city on Savai’i where the satellite Peace Corps office is. So around 11:00 a.m., we walked out to the road and waited for the bus.

There is no hard and fast bus schedule in Samoa. The buses run back and forth during certain hours of the day, and if you live somewhere fairly close to town like Phil does, it doesn’t take long for a bus to show up. A bus drove by as we were walking through the gate of Phil’s school, which was poor timing. When it’s unclear when the next bus is coming, it’s lousy to miss one. A bus in hand is worth two in the bush.

We were in luck though: Phil barely had time to put his trash in the roadside receptacle before a bus from Puipa’a appeared at the top of the hill. AJ waved it down, and within 20 seconds of arriving at the road, we were climbing on a bus.

The bus was mostly empty when we boarded. There were a sprinkling of passengers, but we were all able to get an entire seat to ourselves. Phil pointed out that bus rides like this are his favourite: the bus is empty, and it wasn’t a popular time to go into town so the driver made few stops along the route into town. The public transportation system in Samoa is nothing like any in The States, but I remember thinking the same thing about Saturday Muni rides into downtown San Francisco.

A bus ride on a Samoan bus can overwhelm the senses: the bus’s lack of shocks, the rigidity of the wooden seats, the bright colours, the smell of gasoline and sweat and barbecue, the temperature change—i.e. hot as hell when the bus is stationary, cool and windy when the bus is moving. And then there’s the music.

Magik 98.1 tends to be at the center of popular music in Samoa, but its reach isn’t as wide as the bus system. Most buses are outfitted with blaring sound systems and CD players, and drivers often swap CDs when they congregate at bus hubs in Apia or Salelologa. This system is amazingly efficient and viral. I’m unclear on how CDs are duplicated, but certain songs have a tendency to spread like wildfire. Currently en vogue is a Samoan artist whose name I don’t know, but his songs are everywhere. Googling his lyrics yields no results. I’ll get back to you.

In addition to popular music, a Saturday morning bus ride gives a constant stream of glimpses into the lives of Samoans who live along the road. There was a basketball game in Fogapoa, competing barbecue sales in Fusi, and a funeral in Sapapalii.

We rolled into Salelologa after a quick ride, and that was that. The ride was uneventful, but no bus ride in Samoa is ever ordinary. 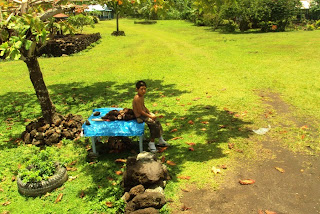 Boy selling taro in the shadow of a breadfruit tree. 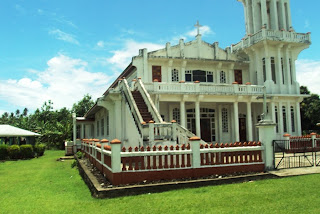 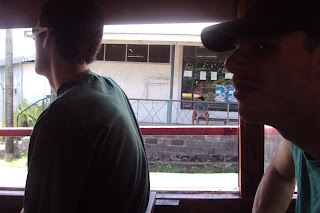 Phil and AJ in silhouette with guy outside store in the background. 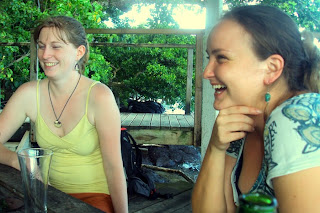