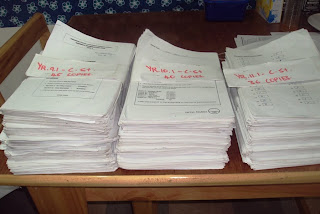 The party has started. I finished grading the free response portion, and I’m about to move on to year 9. The year 10 test integrates multiple choice and free response, and is therefore less easy to break up, so I’m going to save that for last. It’s a slow-going process, and as soon as I start to feel like I’m “in the zone,” I promptly fall right out of “the zone.” Overall I’m happy with the pace though. A couple volunteers who aren’t encumbered with an onslaught of tests to grade have volunteered to help with the multiple choice portion, so I figure if I can finish the free responses by Sunday, things should work out fine. The more I grade, the more I sense a few running themes.

Over half of the 11.3 class answered that the Paste tool “inserts the contents of the keyboard.” It wasn’t until the fourth or fifth time I saw this on a different students’ papers I realized they were trying to say it “inserts the contents of the clipboard.” A bunch of students in the same class also wrote that Bold “makes the sine darker.” This one’s a little more cryptic, but I think they mean “line”. There’s no trigonometry on my computer studies exam.

First of all, it’s annoying that so many of them clearly copied because it puts me in a weird position. Do I slash the scores of half the class because of circumstantial suspicions? Probably not, but it’s disheartening.

But second of all, perhaps even more disheartening is that none of them saw any red flag in those answers. Come on, guys… inserting the contents of the keyboard? How does that make sense?

Going through all of the papers, it was difficult to trace any sort of chain, so I have no idea where these malapropisms originated. I wonder if that student knows s/he has so much sway with his/her classmates. Oh well.

I wrote a “Fill in the Blank” portion into the test in which students choose words from a list to fill the blanks. I feel a twinge of guilt when I correct it because if a student has one word in the wrong blank, it almost always means the correct word is also in a wrong blank. So “Fill in the Blank” seems unfair because one mistake is penalized with the loss of 2 points.

I’ve been compensating for this by throwing in an extra point for anyone who doesn’t have all 6 blanks correctly lined up. Is this unfair to those who do have the 6 answers lined up properly? Probably. But I’m okay with it.

For the Excel Charts portion, I showed a picture of a pie graph entitled “Students’ Favourite Musical Artists”. I stole the artists from one of my year 13s’ PowerPoint presentations, and it includes, among others:
I labeled the pie pieces with the name of the artist and the corresponding percentage, so there was no legend necessary. But then I wrote a question to ask about that, “Why does this chart not need a legend?” To which a student answered, “This chart has a legend. Savage is a music legend.” 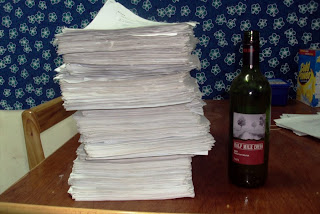 Stacked on top of one another, the tests tower to the height of a wine bottle.
Coincidence?! 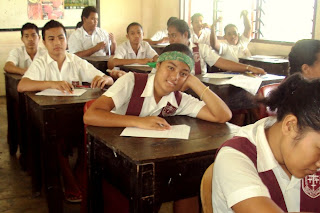 This girl in 10.2, Emily, put on this bandana in the middle of the computer studies exam today. It was a cross between a Ninja Turtle and Samurai Chef.

Ironic that a computing exam is done on paper.

You are too compassionate and some of those kids are real smart asses! Lucky they don't have a Samoa teacher. Samoa school is alot different to when I attended.