Dan, Supy, Phil, and I just returned from a night out on the town, and while I was in the kitchen checking to see if I had any water pressure, Phil suggested we cap off the evening with a parlor game. “Let’s play the one where we each write a sentence of a story, but you only know the sentence that came before.” As it turned out, we were all game. So we played, each of us writing a sentence on our own piece of paper, and passing it around the room twice. The results are a mishmash of nonsensical stories a la Mad Libs. Here they are:

Story #1
Today I was walking down the sea wall listening to my iPod when a Backstreet Boys song came on and I spotted a teine aulelei across the street. I proceeded to chase after her when her sandal came off. Thank God she wasn’t wearing anything too fancy. Her red pulatasi that she wore in honor of the ship’s arrival fluttered in the wind.

He fumbled with his foozball keychain , and then sat down awkwardly in the chair next to her grandmother. She took out her water bottle and decided to throw it at him. His head cracked open and jelly beans and Skittles poured out. And for whatever reason he decided only to eat the red ones.

And the moral of the story is… You gotta fight for your right to party.

Story #2
I sat on the bus waiting for the light to change. It did. A motorcycle came by and a woman flew off it into a ditch. But a soli making coconut cream caught her, mid-air, and saved her from a massive overload of cheap internet and unsalted potato chips.

I checked my collar in the mirror and decided my breath was passable, even though I hadn’t brushed my teeth. Knowing that my teeth were full of plums, I decided to smile at the girl. I knew the dried fruits would only seduce the teine: plums, prunes, dried apricots, and other delicacies found in your average gift basket.

But she didn’t want the gift basket. She wanted him.

And the moral of the story is… Put your toalua before any mealofa.

Story #3
Have you ever fallen asleep while you were brushing your teeth? I heard it’s happened, but only with proper practice. The cat can do it, but only in the left corner of the room.

The cat’s been angry lately, and I knew the only remedy was Wattie’s brand Kitten Formula cat food. Kitty clawed at it because it was just so gross. With enough effort she broke it off, and the man was very sad that yesterday his favorite raincoat was stolen by a kid with eleven fingers.

“Why do I even need a raincoat?” He asked. “This is Samoa, by golly.” And the clouds burst out crying.

And the moral of the story is… Sheep are destined to flock together.

Story #4
Farmer Joe overcharged the lady for her cheddar cheese, and as retaliation, she pinched the check-out girl’s nose.

“Ouch!” screamed the check-out girl, Backstreet Boys playing over the loud speaker. She knew what she had to do. She got the hose and drenched the lady. Never had a customer been so caught off guard.

The surprise was that of a pig who’d been cooked to perfection in a warm and properly prepared umu. The pig closed his eyes and listened to the music blaring from his neighbors’ over-sized speakers. Acknowledging the noise was far too loud, he picked dup a cinderblock and threw it over the fence.

Sadly, he killed Dennis the Menace.

And the moral of the story is… cat food at a discount doesn’t attract the ladies.

Whatever that means. I hope you're well. Pictures below. 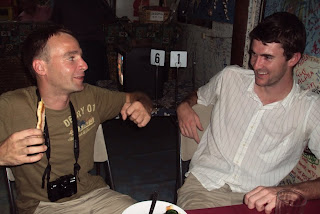 At dinner tonight with Red Cross photographer Robert, who travels all over the South Pacific collecting photos. 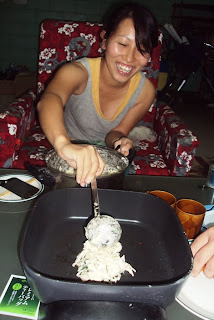 At dinner last night with Japaense [JICA] volunteer Aikio who cooked up some delicious Japanese cuisine.

Those stories have to be the most dijointed, hilarious vignettes I have read in a long time. You guys must have been reading some Lewis Carroll....