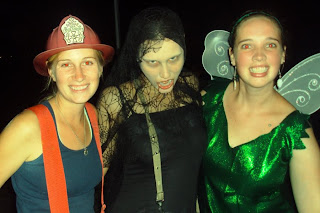 As reported Thursday, much controversy has surrounded Halloween, both because of my lack of costume and the contentious debate over where to hold the party. The bus coming back from Fausaga was an hour late, and I still had no costume when we rolled into Apia at 4:00 p.m. I called Supy, and it turned out the location issue also had yet to be resolved. Things were becoming dire.

Word went around back in August that Jim and Spencer were dressing up as Simon and Garfunkel. I’m a pretty big Simon and Garfunkel fan, and I felt a little heartbroken when heard about this. After discussing the matter with others, it was suggested I go as solo artist Paul Simon. I could get a pair of jeans, a white t-shirt and a grey suit jacket to try and pull off the “You Can Call Me Al” era look. This would have been a slightly obscure reference, and it would have only been funny to me, and I probably would have had to walk around the party explaining the costume to everyone. And who wants that?

Last year’s Halloween party was awesome. It was held at Zodiac in Vailima, which has a huge outdoor patio area where a bunch of traditional Halloween games—bobbing for apples, Cale’s Slimer piñata, etc.—were held. The plan was to replicate this party as best we could. Blakey, the official Social Chair, talked to the management at Zodiac, and given the success of last year’s party they were having a bigger party this year, which they were advertising on radio and TV. Also they were charging a $20 cover. This did not sit well with many volunteers.

My other idea was to go as a Samoan bus. Buses here are pretty distinct, outside and inside, and the plan was to dress the front of me like the outside and the back of me like the inside. I had big plans for the back. I found a UFC t-shirt with an over-the-top pro-American slogan and a feather boa, and I was going to make a flyer for an upcoming siva to tape to my back. The front was a bigger problem. I couldn’t figure out a way to capture the outside of a bus. All my ideas required a lot of money or a trip to Target, neither of which I have access to. I finally scrapped the idea Thursday night.

The Yacht Club surfaced as a possible venue about 2 weeks ago. Consensus among volunteers was agreeable, but Blakey texted a bunch of us last Sunday to say The Yacht Club had been booked for the night of Halloween, and that we were tentatively back at Zodiac.

It’s unclear how the double-booking issue at The Yacht Club was resolved, but when I talked to Supy on the phone yesterday, a contingent of volunteers had decided to go to The Yacht Club. There was a widening schism and at one point it looked like volunteers were going to split for the evening.

On the costume front, I ditched the concept-centric approach and decided to try the materials-centric approach; I brainstormed costume ideas based on things I already had. I figured my thick-rimmed glasses were as good a starting point as any.

I stayed out of the location controversy. While the issue was debated via text messages and in person at the Peace Corps office, I sat at my house, out of the fray. And lo and behold, around 5:30 p.m., it was finally decided that all volunteers had opted for The Yacht Club. Done and done.

I decided to be Peace Corps Samoa Country Director Dale. I realize this reference will fall flat over the Internet, but it was a pretty big hit at the party. Just know that the man has a distinct enough style that it could be replicated. It also helped that Dale and his family coincidentally happened to be eating at The Yacht Club.

So it all came together in the end. 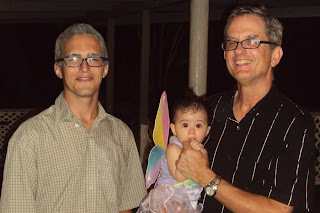 Me as Dale and Dale with his daughter, Celine. 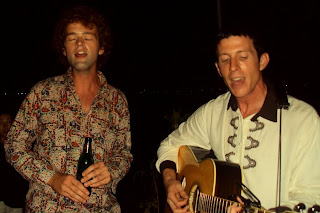 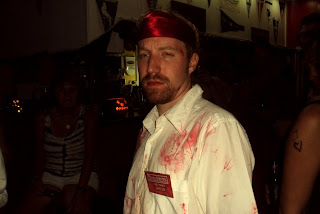 Casey as Sean of the Dead. 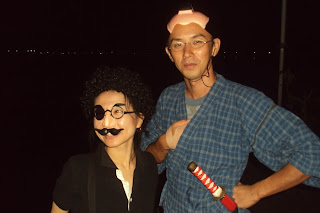 JICA volunteers were there too. 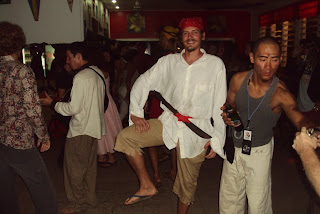 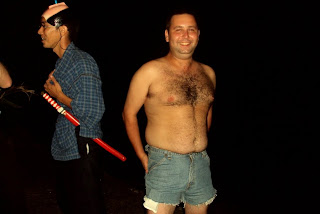 My neighbor showed up at our door with his young son during the halloweening Saturday evening, wearing a weird hat, and a grayish black sweatsuit. On it, front and back, he had placed three lines of reflective tape, the center one broken, the other two spread wider at the bottom, narrower at the top to simulate depth. He then had sewn two stuffed animals (oppossum and raccoon) on this, one in front, one in back. I said "What the heck?". And he answered "I'm roadkill" I could see then the lines were to look like a highway. Next year, easy, cheap idea for you!
But you look eerily like country director Dale in that picture!

twinsies! how did you make your hair grey? i'm glad you guys had fun!

I just saw your picture with Director Dale. I had a good laugh. But you needed a Celine look-alike.

By this, you can be sure that you would not be missing out on any of the games. Click here This happens because you have to plan, negotiate and take actions in the game instantly and also in a proper order.