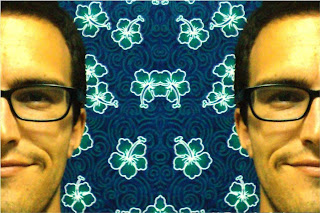 When I trained for my first marathon, I remember I felt really good when I reached the halfway point of any given run because at that point I was pretty much guaranteed to finish the course, if for no other reason than I’d have to get back to where I parked the car. The longest run I did was a 20-mile course from Dockweiler Beach to Redondo Beach and back (The following week when the team did the 22-mile run, I sat in the car and slept. What a whiner.). In any case, when I got to the turn-around point, I thought to myself, I will get back to the car if I have to crawl.

By my calculations, today marks the unofficial halfway point for Group 81’s tenure in Samoa. Since volunteer departure dates vary within each group, so it’s difficult to pinpoint any specific time, so I’m basing my numbers on staying until 2 years after our official Swear-In date and then taking the flight home on the following Monday.

I realize I made a big to-do about the one-year mark last month, and there will probably be more fanfare in December to mark the one-year anniversary of Swear-In, but I feel like the symbolism of today might be stronger than either of those. Today is Hump Day on a macro scale. We’ve spent the last ~13 months climbing the mountain, and now it’s time to start our ~13-month descent.

Going back to running, when I’m on a long run like that 20-mile course, there’s a lot of time to think, and one way I enjoy passing the time is thinking about the numbers. At the 5-mile mark, I think about how for every step I’ve taken, I need to take 3 more steps. And then at the 8-mile mark, every 2 steps I’ve taken, I need to take 3 more. It’s always exciting to make it to the halfway point because that’s when the numbers change and number of steps taken surpasses the steps remaining. You’re not driving into the tunnel anymore, you’re driving out.

Although I don’t mean to make it sound like I’m in a tunnel. And I’m not a prisoner chalking days up on the wall. I’m having a great time in Samoa (except for the paper-grading), and as exciting as it is to come this far, there’s also the worrisome realization that we’re not going to be here forever. There’s a lot left to do in school and out. I want (Max) to setup an intranet in my computer lab so my kids can email each other. I haven’t been to the Blow Holes on Savai’i, nor have I been out to any of the smaller islands like Manono or Apolima or even Namu’a. I could go on with my Samoa Bucket List, but I’ll spare you.

One more running analogy: When Brian and I did the San Francisco Marathon, our split for the first half was excellent. I nearly puked on the Golden Gate Bridge, but hell if it slowed me down. Save for a quick bathroom break around mile 10, we ran those first 13.1 miles fast. But not too long after that, I needed to walk for a while. And from what I’ve seen from other groups, that scenario seems to fit the Peace Corps as well. The first year is one prolonged adrenaline rush, and then you need a breather. Which isn’t to say that people begin to slack off. But I think people start to feel the limitations of time and the weariness of their persons.

Running the race, I’d start to realize I was on a 26.2-mile tour of San Francisco. I could put my head down and power through the rest. But it was a such nice day. Might as well take it easy and enjoy it.

Here’s to enjoying the last 13 months and looking forward to 13 more. Picture below. 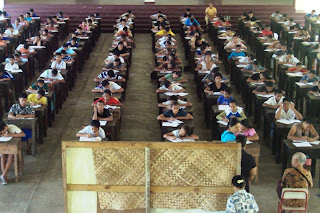 Today was my school's Entrance Exam for next year's incoming class. This is the view from above.

Trivia bonus!
Which side of my face was duplicated to create the above-the-fold image?
Posted by Matthew at 7:00 PM

I'm so proud of you. I can't believe you've been gone for so long. Best of luck on the next 13!

I'm guessing the right side. If you had smiled a little more I'd know for sure because the dimple would (or wouldn't) show! 13 months -- pretty impressive.

You better hurry up on getting Max to wire your computer lab. He doesn't have much time left if he leaves with the rest of group 79